Pro-Choice Motherhood, March for Our Lives, and the Souls of Young People 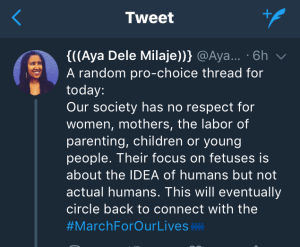 Our society has no respect for women, mothers, the labor of parenting, children or young people. Their focus on fetuses is about the IDEA of humans but not actual humans. This will eventually circle back to connect with the #MarchForOurLives.

Parenting is highly skilled labor. In traditional societies, people lived in multi-generational families+learned parenting skills from early on. But the nuclear family robs everyone of that training and we read books+listen to podcasts to learn what we could’ve known all along.

The nuclear family is critical for patriarchy because having too many people around challenges father-knows-best. It’s crucial to isolate the wife+kids w/ him so he can dominate them in isolation+the society can call it privacy. This is not in the best interest of moms or kids. 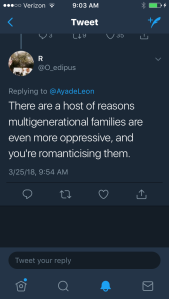 I got some push back from this twitter user. It’s true that in patriarchy, the extended family can sometimes be toxic. I’m really referring to pre-colonial village societies with more gender equality.

Or single moms end up being dominated by the sexist society as a whole+lose out on resources in a setup where the man is supposed to be primary breadwinner. Sometimes it’s worst of both: denied material resources from the dad AND targeted with his attempts to dominate her+kid(s).

But parenting is skilled labor that is best learned via apprenticeship. It requires planning, huge amounts emotional labor, time to organize, network, strategize+de-brief. None of that is compensated or even ACKNOWLEDGED in this society. Women aresystematically exploited to do it.

The difficulty of the work is systematically hidden+denied. New moms always look shellshocked: “no one told me.” Only as a feminist since my teens had I been warned. And there’s a difference between the abstract idea of exploited labor+actually living it. Year 1 my motto was WTF?

But parenting is skilled labor. Someone needs to raise the next gen of citizens of workers of leaders, etc. This is a job done on behlaf of the society. But the society resources+compensates parenting like a hobby (knitting anyone?)+frames it as an individual choice women make.

Parenting as individual choice is part of the patriarchal private property arrangement in the nuclear family. Historically men owned women in marriage+kids. Women didn’t have a choice in the matter of these things. So our personal choice to have kids or not is actually a step up.

Imagine if people with certain biology were told it was their God given duty to fly passeger planes. We see how absurd that would be: “You had sex, now you need to fly this plane.” “Can I get a co-pilot?” “You had your co-pilot when you opened your legs. Now You’re on your own.”

Our culture has more respect for airline customers than children. The work of parenting is just as specialized. Pro-lifers don’t care about children. Their policies treat them like dirt including pre-natal care. So much for caring abt fetuses. And once they’re born it gets worse.

What a surprise! Interrupted during my rant abt parenting b/c I had to feed my kid breakfast (while my man is laying in bed probably playing video games). Don’t get me wrong, a brother works hard all week. But for parenting, I’m mostly on my own. Now, where was I? Right. Ranting.

So our society says “children are the future” but treats the future like shit from the moment they’re born. Part of what’s hard in our society: mothers are isolated, under-resourced+have to learn on the job. We don’t let brain surgeons learn on the job w/o support. Why mothers?

Teachers must be credentialed. Therapists need to licensed. But mothers, who are both teachers AND therapists, don’t deserve training, resources or support. And society thinks it’s okay to raise kids in these conditions. B/c mothers have insider knowledge from cis female biology.

We r meant to mother because it’s our God given role? +we opened our legs. Picture that in other skilled labor. Day 1 at a therapist: “What’s yr training background?” “Well, it’s my God-given role+I opened my legs. So let’s start w/ yr childhood, Don.” “Ok. My family was cold…”

So it all makes sense. It makes sense that the conservative forces in a society that claim pro-life but treat mothers+babies+families+children like dirt would be fine with teens being shot down in their own school. Or at the mall or on dates or in the street or anywhere.

Young people’s lives have never been important the misogynist agenda. Children, families, babies, fetuses+young people are just exploited to put a human face on their agenda of subjugating+exploiting women, even to their own detriment. Families+nations w/ liberated women thrive.

The sad part is none of this is actually in men’s best interest. Rather in the interest of toxic masculinity+elite men who need puppeteer strings to control the masses of men. But young people are going to lead us all thru this mess. Thanks to the moms that raised them to fight. 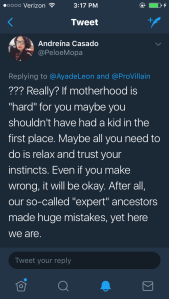 <= I didn’t respond directly to this reply tweet (if people seem hostile or condescending, I don’t reply directly to them) but I took a picture of the tweet and posted the following in response.

1/3) This is exactly what I’m talking about. Motherhood is seen as a personal choice, like a hobby. If knitting is hard, don’t do it. But raising young people isn’t a hobby, it’s part of the human experience+shouldn’t be a private property project for one or two parents only. 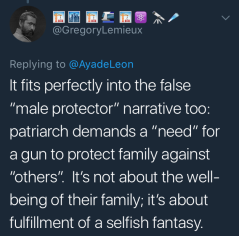 I also got many retweets and positive response. This particular twitter user had an important addition connecting the dots between families, toxic masculinity and gun violence.

2/3) Wr wired for the village. Children thrive in a complex+large set of relationships. But beyond that, cis women AS A CLASS do the reproductive labor of society. Any woman should be able to opt out+that’s why I’m pro-choice. But SOME WOMEN will be doing this labor for society.

3/3) Whether I personally became a mom+even in delegating care as a mom, I’m concerned abt conditions of women’s lives+work everywhere. Who does this work for society? What’s her age/race/class/nationality? Are they her kids? Is she nannying? It’s abt justice for women AS A CLASS.

(Posted later) This rant was partly inspired by some tweets where one person justified banning abortion by saying they believed a fetus had a soul. The pro-choice person said they didn’t believe in souls. I realized I’m pro choice b/c I believe to parent is to be responsible for another’s soul.

I believe that one must enthusiastically consent to the lifelong path that is parenting, of caring for another soul. I feel both the weight+joy of that responsibility every day as a mom. So I think there are worse things for a soul than not having a chance to walk the earth.

In my observation, it is more brutal for a soul to walk the earth w/o caregivers fully invested in their well-being. In my belief system, if one misses a chance at life, there will be another. But to feel unwanted/unloved is a heavy burden for a soul to carry for a lifetime.

(In conclusion) Beyond yesterday’s twitter rant, I’ll add this. Babies embody human nature: curious, emotional, uninterested in exploiting anyone, reaching for connection, open, vulnerable, and fully aware of their interdependence. This is why young people so often lead, because–unlike adults–they haven’t fully forgotten their vulnerability and interconnectedness. We adults have often set up our lives so we can have the illusion that we are going it alone and not vulnerable. But that’s a lie. A lost job, natural disaster, devastating illness, or episode of gun violence shocks us into reality. The time has come to connect the dots: toxic masculinity needs to stop being the de-facto law of the land. Women need bodily autonomy, young people need to be respected from birth, the work of raising families need to be respected, supported and resourced, and guns don’t need more rights than humans.

This entry was posted on March 26, 2018 by Aya de Leon in Uncategorized.