Little did I know, when I began blogging about Disney princess issues a few months ago, that we would witness an unprecedented sexist backlash from Disney.  Princess Merida, from Disney/Pixar’s Brave was inaugurated into the Princess fold on May 11th but in order to be part of the clique, she was redrawn.

Of course, I found out about the redraw a few days after I had bought my three-year-old daughter a Brave book. The story was good—Merida is a badass archer, she refuses to marry, and the central relationship focus is about Merida and her mom developing mutual respect. I thought I couldn’t really go wrong introducing this kind of character to my daughter.  But the tomboy Merida that many of us so trustingly introduced to our children has morphed into Barbie Brave.

The outrage and resistance from the feminist mom sphere has been loud and immediate.  The writer and co-director of Brave, Brenda Chapman, publicly objects to this “sexier, slimmer version of Merida with a come-hither look and an off-the-shoulder dress.”  For the redraw, Disney also removed Merida’s trademark bow and arrow.

Chapman explains that she created Merida intentionally to be “a different kind of princess…with a strong will…[who] is not obsessed with what she wears or focused on looking good to attract a man. She’s a young girl — not remotely ready to think about romance or marriage. …she is an individual who has her own interests. And …that’s exactly the way that children should spend their childhood and adolescence — being kids and pursuing the things that make them happy….Why on Earth does that image [of Merida] need to be changed?”

The interview with Chapman is published on the website A Mighty Girl, which features alternative princess books and other resources to support girls’ strength and resiliency in the face of sexism.  When A Mighty Girl heard about the redraw, they began a petition to “Keep Merida Brave” on Change.org.   Peggy Orenstein, the author of Cinderella Ate My Daughter is often at the forefront of discussions about how princess culture affects young girls. Orenstein writes on her personal blog, “In the end, it wasn’t about being brave after all. It was about being pretty.”

Disney has backpedaled a bit in response to pressure from the petition, Chapman, Orenstein and many others.  They gave Merida back her bow and arrow and have said the makeover version would have a “limited” run.  But no one is sure what limited means in the context of Disney’s merchandise career that started with Snow White over 70 years ago.

I’ll be signing the petition and am glad to see Disney making concessions.  But it’s just a reminder that we really can’t trust a corporation like Disney, and even when change seems to have taken place, their commitment is to protect their brand:  the skinny, sexy, long-haired princesses, their helpless romantic storylines, and happy ending marriages to princes. We need to realize that films like Brave are not only a departure from the status quo, but also threaten the staid quo. 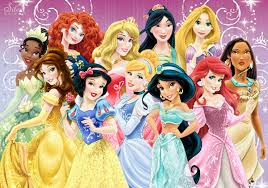 And here’s Disney with the new Merida.

In the Disney lineup, we have standard blondes in the middle. But we’ve got fetish black, Asian, Arab, Native. What do you like?

In contrast, the placement of the original Merida in the princess lineup makes us wonder: why is there a child in this group of women? 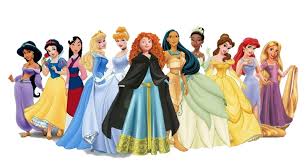 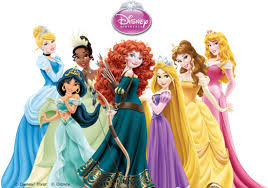 But the revised Merida fits right in. Now we’ve got a feisty redhead as well as our demure redhead (Ariel the little mermaid)..

The Disney brand sells sexualized cartoon images to little girls. Because Disney has been selling these images to children since the 1950s, they have saturated the culture for generations.  Most of us have been looking at these images since childhood, so they look “normal” to us, but in fact they are sexually inappropriate for children.  The original Merida does not fit in with the sexiness of the brand.  However, even beyond that, Merida, by reflecting an age appropriate image, exposes the inappropriateness of the brand overall.  Disney’s not going to give up without a fight.

The good news in my house is that my daughter has moved on from the Brave book—I don’t even know where it is. Her new favorite book is a kids’ bio of  Olympic gymnast Gabby Douglas, a real world badass young black woman.

When I go to the A Mighty Girl website to sign the petition, I’ll definitely order some alternative princess books. And I need to start thinking about writing some books of my own.  The moral of the story? We can’t expect integrity from corporations.  We need to create, distribute and support independent media.

One comment on “Disney’s Bravest Princess Forced Under the Knife”

This entry was posted on June 14, 2013 by Aya de Leon in Uncategorized and tagged Disney, parenting.