Confederate Flag 2 – How to Talk to Small Children about Racism: Celebrating Bree Newsome

Last night, our family ate dinner with another family, and their kid had seen a video of Bree Newsome taking down the confederate flag. Yesterday, I wrote a satire post for adults about the confederate flag, but I wasn’t sure at first how to explain the anti-flag activism to my daughter. For some time, I have been working with a group of parents in the Bay Area to create Black Lives Matter activism activities for children 0-8. I have been adamant that our work to help them understand racism be developmentally appropriate. I believe they need to be given information about racism where the concepts are broken down to build on concepts they already understand. Our country’s history of anti-black racism and current police violence is terrifying—even to adults. The brutality of these histories and current realities should be handled gently with children. Part of racism in the US for black children has meant that our children don’t get to have a childhood. From early on, we learn that our lot in the US is to be targets of brutality. This is early training in being terrorized. I want to do a slow and gradual job of explaining the brutality of racism to my daughter. And let’s be clear, this is only a recent privilege (segregation meant learning about brutality early for survival). And everybody doesn’t have this privilege. Small children in families of black people who are abused and killed by police learn these lessons early and brutally. The reason I choose to go slow with imparting this information is two-fold:

First, because young children are very literal. For example, if I explain that people with black skin were held in forced servitude or are being targeted by police, black children run the risk of being confused that their skin was the cause of the enslavement or the violence, not racism. My focus is on learning about the inequality in language they can understand. When she’s older and has a clear grasp on the dynamics of mistreatment and exploitation, I can explain that skin color was the pretext for the mistreatment, not the reason for the mistreatment.

Second of all, I take this approach because I am trying to raise a leader. I don’t want her to be so terrified by information about racism in her early childhood that she develops the idea that she is powerless to change it. I am constructing a narrative of explanation that emphasizes people’s power to transform injustice. And I believe that. Which is why I am attempting to raise a leader. Bree Newsome is a great example of bold leadership.

So here’s the story I wrote–with pictures! 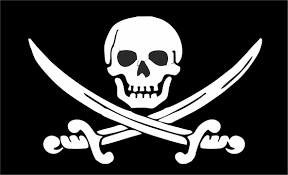 A long time ago there was a mean group of pirates. This is a regular pirate flag.  And they took some people prisoner on their ships and sailed far away. And they made them work all the time and didn’t let them play. And didn’t pay them any money. And they wouldn’t let them leave. And they were mean. And the people they were mean to said, this isn’t fair. We’re gonna get out of this. And the fought back and a bunch of them escaped and other people helped them. And they had a big war about it.

And this was the flag that the pirates used in the war. And the pirates lost the war. And the people they had been mean to got the right to be paid and leave if they wanted to. But the mean pirates were mad. Because they didn’t want to do their own work. So they remembered the pirate times as good times, because they got had other people doing all their work for them. But the people who did all the work and didn’t get paid and had pirates being mean to them remembered those times as bad times. 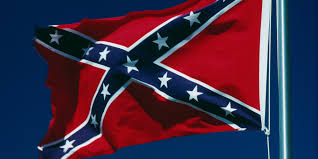 And the kids and grandkids and great grandkids of the people the pirates had been mean to, and their friends all said that’s a flag from bad pirate times, and the pirates lost the war and you don’t get to fly it anymore. Take it down! But the people on the side of the pirates said no, we’ll fly our pirate flag if we want to because it’s our heritage. And the other people said that flag reminds us of meanness and our ancestors being treated bad.
But the people on the pirate side wouldn’t take it down. And they put it on a high high flagpole and they put a lock on it.

And people were mad and they shouted about it, and wrote articles and sang angry songs and spoke poems, but the flag stayed up.

So a brave woman named Bree Newsome and some of her friends said that’s enough, pirates! And she got her climbing gear, and her tools and she wore her helmet. And her friends helped her. And she was so strong and so brave. 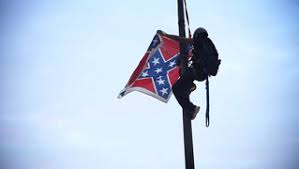 So, She climbed to the top of the pole and cut down the flag. And the people cheered. But when she climbed down, the people on the pirate side were so mad, they had some people who work for them take her prisoner. But most people thought she was a hero. And people all over began noticing pirate flags and making people take them down. And the people got Bree Newsome out of jail, and she went around telling everyone why she did it. she said:

As you are admiring my courage in that moment, please remember that this is not, never has been and never should be just about one woman…This is a multi-leader movement. I believe that. I stand by that. I am because we are. I am one of many.

I did it because I am free.

17 comments on “Confederate Flag 2 – How to Talk to Small Children about Racism: Celebrating Bree Newsome”

This entry was posted on July 4, 2015 by Aya de Leon in Uncategorized.