Beyonce, The Mirena IUD, and Contempt Toward Black Motherhood

In the era of Tr*mp, most everything I love is under attack. Today, I feel moved to take on a phenomena that is in no way new, the current attacks on Black Motherhood in pop culture. In particular, Beyonce’s pregnancy photos and birth control commercials.

In a historical moment where women’s reproductive freedom and access is under attack internationally, I want to be excited about birth control ads. In particular, I wanted to like the Mirena IUD ad. And I was excited until I saw the unfortunate but predictable way that race was playing out in the advertisement. Unlike other birth control ads I’ve seen, where a wide array of young women of various races look liberated and carefree to pursue their childless lives, this commercial featured a young woman who already had two kids. And she was black. Lightskinned, but clearly African American, as were her kids, who were stressing her out. “I can’t even think about having another child,” thinks the harassed mom, who had just been wondering if she had taken her daily birth control pill.

The white-sounding female announcer voice encourages her to try the five-year effectiveness of the Mirena IUD. In other words, this particular birth control ad, which posits children as a burden, decided to use a black woman as the face of parenting as a problem.

After ten different scenes of mom looking overwhelmed while her mischievous children wreak havoc, we have a scene with the kids’ father sitting in a lawn chair and ignoring the kids while reading the paper and eating candy. So the message is clear: black women have too many bad-ass kids, and black men are lazy.

The complaint that men don’t do their share of parenting and domestic labor–that they have leisure time while the women do all the work–is in no certainly not exclusive to black women. These critiques of uneven divisions of labor along gender lines show up in various white feminist arguments from the groundbreaking book Second Shift to more recent works like Maxed Out and Overwhelmed. Or the forthcoming How Not to Hate Your Husband After Kids by Jancee Dunn. As a black woman with a black partner, I’ve had some of these same complaints. However–and this is the crux of my argument–to show black people as the poster family for this problem is racist.

In a medium that is so overwhelmingly white, and where white women are posited as the every-woman, why is it that suddenly, when it’s time for certain messages, that black women reliably appear? We are likely to play the white protagonist’s sassy friend who gives good dating advice, but isn’t considered conventionally attractive enough to be any competition for male attention. We play the magical spirit guide with no goals or character development who helps white protagonist find him/herself. In action stories, we play the incompetent bureaucrat who has been put in charge of the operation, but whose lack of judgment and imagination threaten to ruin everything–ours is the authority that the white character must defy in order to save the day. With a few notable exceptions, black actors can’t be found to play the love interest, the hero, the scientist, the doctor, but we can always be found to play the foil, the helper, the villain. And in this commercial, of all the women who could have a shiftless husband and need help not having any more kids, this corporation chose a black woman. Toward the end of the ad, the black mom thinks to herself: “Oh, I think two’s plenty.” So what could have been a comment on the labor of motherhood and the sexist division of labor in our culture, instead has a creepy implication of eugenics, like black people just shouldn’t breed so much. 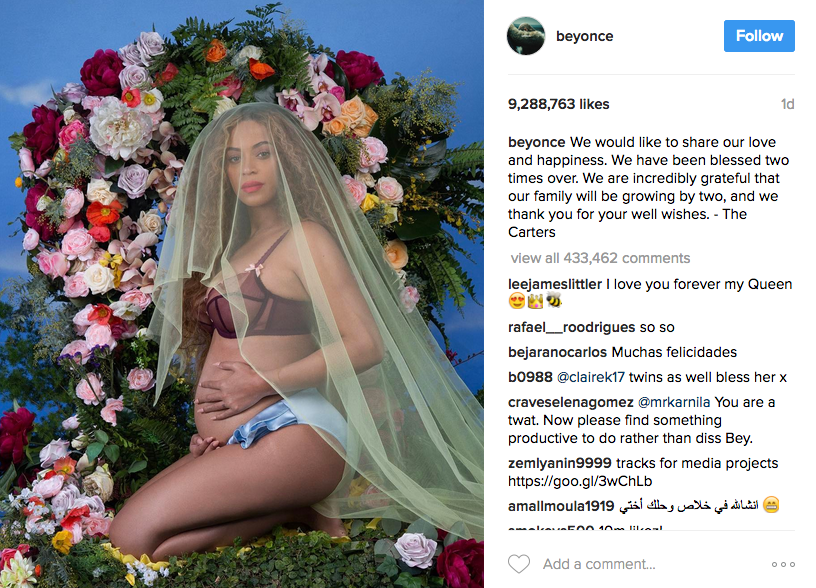 To further illustrate the point, we see the racist contempt for Beyonce’s pregnancy, and the criticism of the photos of her pregnant body. A great post by Lara Witt at the establishment explains why critiques of Beyonce’s pregnancy photos are racist. Another post by Catherine Young at bitchmedia explores the symbolism of the photos, and quotes Feminista Jones: “Black motherhood is so vilified that people do have vulgar responses to pregnant Black women. If Black mothers aren’t devoting their nurturing and maternal talents to people other than their own children, people have visceral reactions. And the image of pure love, that of a mother growing her own child for her to love and prioritize, as expressed by a Black woman, angers some.” Thus, between the IUD ad and Beyonce’s photos, we see this uninterrupted contempt for pregnant black women.

I felt it during my own pregnancy. When I was out in public under the white gaze, I felt vulnerable, like my curving belly marked me as having done something wrong. If I felt it–at age 41, married and teaching at the university–what overwhelming type of stigma is directed at women who are younger, unmarried, or more economically marginalized? The contempt isn’t about what we have or haven’t done to be respectable, it is targeted at our black and female bodies, by virtue of the fact that we are multiplying.

And yet, as black women, it is our reproductive labor that grew the bodies of the the enslaved black labor that built the wealth of this country. Our villified wombs are the actual source of American wealth. Yet because we are no longer chattel property, white America can’t celebrate our children as a crop. In the racist imagination, there is always something wrong with our children, our pregnant bodies, our joy at having our families, our owning ourselves.

Which is another reason Beyonce is under attack. In this awful political moment, she is doing what black women have always done, and had to do under the most arduous of conditions: she’s celebrating the force of life that is stronger than Tr*mp, republicans, slavery, or the US. She is celebrating our Black Future. A wanted pregnancy by an enthusiastic mother isn’t the only way to celebrate our future, but in these brutal times, we need to celebrate in every way that we can.

3 comments on “Beyonce, The Mirena IUD, and Contempt Toward Black Motherhood”

This entry was posted on February 7, 2017 by Aya de Leon in Uncategorized.