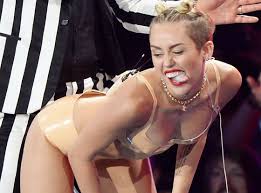 2013 witnessed the coming of age of two former child stars in very different ways.  Lst year’s zeitgeist moments of Miley Cyrus and Beyonce have a lot to teach us about the dynamics of women, feminism, and the entertainment industry.

Childhood stardom frequently means bad news later in life.  From the 70s to the 80s, we watched the entire cast of Diff’rent Strokes meltdown. from the 90s to the new millennium, we watched Britney Spears skyrocket to superstardom as she was rebranded from Mouseketeer into a not-quite-legal sexualized ingenue sensation.  She was worth her weight in diamonds, when she came of age and already had name and face recognition. But that moment is fleeting. A sexualized but ostensibly virginal seventeen-year-old is bankable to all:  tween and teen girls, heterosexual men of all ages who go for a hot young blonde.  But once she could no longer straddle the virgin/whore line, and once she was a messy divorcee, a neglectful mom, and a hot mess, we saw how the transition from child to adult star was far more brutal to her than to her male counterpart, Justin Timberlake.  The third member of the Mouseketeer crossovers, Christina Aguilera never quite had the white girl moment of media domination, but she’s proven to have more staying power.

Beyonce, born the same year as Britney Spears, began performing publicly at age seven, and her group Destiny’s Child had their first record deal in her early teens.  With the support of her family, she transitioned from a girl group to a solo career in her twenties.  In 2013, at the age of 32, she stealth released the album that exceeded all expectations of what would be possible for feminism in the R&B mainstream.  Meanwhile, Miley Cyrus was a center of feminist controversy with regard to her public feud with Sinead O’Connor about Cyrus’ sexualized image.  She was also criticized for her racial appropriation of hip hop and African American culture, as well as her public dance reenactment of sexually dominant behavior toward black women’s bodies.   She also drew fire for engaging with Robin Thicke and his rape culture anthem that was arguably stolen from Marvin Gaye.

Like Spears, Cyrus’ Disney childhood stardom gives her face and name recognition, and a cute Disney image to rebrand from.  But coming of age a decade later than Spears, in today’s even more sexualized culture, there’s far less demand for the ingénue.  Cyrus went straight to bad girl, and swings nude on a wrecking ball for all to see.  It will be interesting to see where Cyrus goes from here.  It would be difficult for her to continue trading on shock value, because sex and shock has a limited appeal before she gets pushed aside by the next sexy shock-value new girl.  Since we have yet to see much in the way of creativity from her, she hasn’t positioned herself to pursue some new artistic exploration.  But I wonder where her early thirties will find her.  She may become the next media self-destruction sideshow, or she may evolve into a more mature artist with some staying power.  While I can’t say evolution looks very likely right now, change is inevitable, and it could go either way.

Beyonce, on the other hand, has clearly chosen a path of evolution, one that has brought her to a hotly debated location in feminism.  In Spring 2013, Ms. Magazine had Beyonce as a cover model, with Janell Hobson’s article exploring African American feminist scholars’ debating whether or not they read her as feminist.  Beyonce’s all female band’s explosive performance at the Superbowl (that allegedly blew out the power) pushed her even further onto solid feminist ground.  However, her latest album, unprecedentedly dropped with no promo, has cemented her as a feminist for many.  Her equally unprecedented sampling of feminist writer Chimamanda Ngozi Adichie in an album with anthems about body acceptance, and explorations of female sexuality have led to debates that blew up feminist twitter.  Some, like Professor Brittney Cooper, that only racism has led many white female critics to label Beyonce as not feminist enough.

I would argue that Beyonce, by virtue of her child stardom, has done something else previously impossible.  She has bloomed into feminism in the height of her pop stardom, and is shifting the cultural conversation about women artists, feminism, and pop culture.   The mainstream entertainment industry doesn’t sign debut artists whose work has strong feminist analysis, but instead offers up pre-fabricated feminism lite.  In the 80s, the breakthrough rap duo Salt n Pepa were a perfect example.  They were heralded as powerful female voices in hip hop, but they didn’t own their own names or have creative  control over their work.  “Salt” and “Pepa” were their manager’s trademarks, and he had developed the vision for the group before he recruited the two nursing students to be rappers.  The Spice Girls’ 90s “Girl Power” was another perfect example of a girl group created and assembled by men who continued to control it.  The work of these and other mainstream female artists’ speaks to women’s desire for more equality and respect, but male producers are careful not to cross the ropes into the feminist deep end, where stronger critiques of patriarchy and industry can be found.

Beyonce, on the other hand, entered the industry as a teenage ingénue.  When Destiny’s Child broke up, she became a bankable solo artist in her early 20s, and began the process of navigating her adult acting and music career with leverage and star power.  If Beyonce entered the industry today in her early thirties with an unpromoted album quoting a Nigerian feminist writer and talking about women’s lib themes would she go platinum?  Absolutely not.  Even if she’d entered the industry with this album as a twenty-year old, she’d likely be tracked into an indie music circuit as opposed to pop stardom.  But it is precisely because Beyonce entered as a young teen, she had a chance to learn the industry, build her team, and ripen into a total feminist badass, while she still has the highly prized youthfulness that the industry demands in order to put the full weight of the machine behind her.

So not all female child stars are on a path to self-destruction or mediocrity.  Some have the unparalleled opportunity to come of age and into their power and be forces of transformation.  So while Miley Cyrus swings naked on the wrecking ball, Beyonce is the wrecking ball, crashing through glass ceilings in pop music, and tearing open a door for more mainstreaming of feminist artists of color.

5 comments on “Beyonce vs. Miley Cyrus: A Feminist Tale of Two Childhood Stardoms”

This entry was posted on January 31, 2014 by Aya de Leon in Uncategorized.