And so it begins. Hugh Hefner, the Playboy King is dead, and the battle for his legacy is on. Predator/exploiter/misogynist? Maverick/ally/visionary? Both can be true, and their intersection is complicated.

At my first job after I moved to the Bay Area post-college, the boss was an African American man who came of age in the 60s. He read Playboy and insisted he read it for the articles. I knew his family, and by all accounts, he wasn’t particularly interested in porn or naked white women. But I remember how defensive he was about the magazine, the frown line between his eyebrows as he insisted on his aboveboard motives. And I believe him. But he didn’t understand (and I couldn’t articulate it at the time) that I, as a young woman, didn’t have the privilege to ignore the naked white women. Because they were there, spread on the glossy pages for his gaze, and he could flip past them if he chose. To him they said, “look at me!” And he could chuckle and continue with his serious intellectual pursuit.

Those women had a completely different conversation for me. They said, “your appearance matters far more than your intellect.” “Men are mostly the ones writing and reading these articles, but women are the objects.” They hissed at me: “you should be thinner but with bigger breasts.” And above all, they told me “white people are superior. The blonder and whiter, the better.”

Of course there are exceptions. Women sometimes wrote for Playboy, and some models were brunette or even of color (though their bodies never deviated). But the pattern and the values were clear.

Now that Hef is dead, people are making him out to be a liberal hero. Exhibit A: he supported abortion rights and Planned Parenthood. Of course he did. A rich man who makes a lifestyle of screwing young fertile women into senior citizenship doesn’t want to be the king of unplanned pregnancy.We’ve become so accustomed to the sexism of the right wing, with the position that women should be pure, that we can’t see other types of sexism. Hef’s sexism sees women as sexual objects with whom he shouldn’t have to be bothered by any concerns about their fertility or sexual health. He should just be able to screw them or ogle them or pose with them for photos. His support for reproductive rights was really just about delegating any sexual responsibility to women and our organizations. 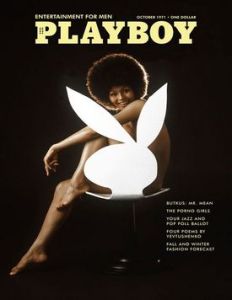 Exhibit B: people also point to Hef and Playboy’s progressiveness around race and journalism. A tweet thread today notes that Alex Haley got his start there, and that featured black women cover models in the late 60s when other magazines didn’t or wouldn’t. This is all true. But where are the darksinned black women with big afros on the cover of Playboy today? We still exist, you know. No. Playboy was following the trend in the African American community, not setting it, even as other magazines refused to even follow.

Also, as the only magazine in its demographic, Playboy had no real competition. The masses of men who wanted the experience of intellectual stimulation while looking at naked women weren’t going to cancel their subscription because the magazine took an occasional risk on race. The sexual content basically subsidized the racial risk-taking. Hef isn’t the only one doing this. Porn performer Madison Young used her profits from working in the LA adult film industry to subsidize a feminist art gallery with skyrocketing San Francisco rents. My debut novel Uptown Thief is about a group of sex workers who subsidize their women’s health clinic with an escort service (and then a daring set of heists). Sexual labor has created the resources to support many political and creative projects. But Hef wasn’t doing the labor, and the workers weren’t in the same demographic as the audience. Finally, by the most recent reports, the behind-the-scenes working conditions reveal the sham of Hef’s mansion as a misogynist’s fantasy land.

In her memoir Down the Rabbit Hole: Curious Adventures and Cautionary Tales of a Former Playboy Bunny, author Holly Madison reveals a verbally abusive Hefner, as well as a dynamic of financial and emotional control. Above all, it reveals the sham of the Playboy fantasy of enthusiastic female sexual availability. Holly Madison tells a story of sexual manipulation, from Hef offering young women illegal drugs like quaaludes, to a bait and switch about sex with the elderly man: “she had been assured that none of them actually had sex with Hefner, and it seemed like a nice — and free — place to live.” Holly Madison was “desperate to stay in Los Angeles,” but after she moved in: “she was told that it was time to go to Hefner’s bedroom.” The previous quotes are summaries from a BuzzFeed article by Kate Arthur, but the following are Holly Madison’s own words: “none of the girls would ever really admit to it or talk about it…They knew it [group sex with Hef] was kind of a quote-unquote requirement for living there, and expected…” During her time in the mansion and with Hef, he was emotionally abusive, he isolated her, making her quit her job, and she sank into a deep depression. Her state of isolation and financial dependence kept her from leaving for many years. So this fantasyland of “free love” was really about emotional manipulation of women who were financially and emotionally vulnerable.

I wrote about Playboy in the past when they decided to take out the nude photos. I maintain what I said then:

One of Playboy’s plans is to have a “sex positive” and “enthusiastic” woman to write a sexual advice column for their new version of the magazine….I suspect they want her [the columnist] to be particularly enthusiastic about whatever men want in bed…True sex positivity is not about being yes-women to what men demand, it’s ultimately about women taking charge of saying yes and no in the service of constructing a sex life that feels good for our own bodies. This is in direct contrast to the post-sexual revolution prescription for us to construct our sexuality in service of men’s sexual and emotional needs feelings.

To be truly sex positive is to have a culture of enthusiastic consent, not uneasy manipulation. I believe Holly Madison’s account, and deem the Playboy mansion a fail at being sex positive. The entire Playboy brand was never an equal opportunity space of freedom, rather a space for free male sexual fantasy, and some limited intellectual edginess. I’m glad Alex Haley could do good work there. Black trans writer Janet Mock also got her first paid journalism job there, (although she had to mention her bra size in her cover letter to get an interview). If, like my old boss, you’re a guy who liked the articles, (or any other good they did) go ahead and claim that. Both can be true. But I hope you’ll acknowledge that such goodies came at a price for women. I don’t want to invalidate the positives of the institution. But please, let’s not use that good to try to sanitize the misogyny of the institution. Really. Just don’t.

This entry was posted on September 28, 2017 by Aya de Leon in Uncategorized.