Ten-year old girls take on the president in my new chapter book: EQUALITY GIRLS AND THE PURPLE REFLECTO-RAY

After the 2016 election, Reflection Press published a wonderful book: When A Bully is President:  Truth and Creativity for Oppressive Times, written and illustrated by Maya Gonzalez. The book’s audience was 7-10-year-olds. It was billed as self-care for kids. This was my favorite children’s book connected to the 2016 election. My latest publication is my own response for the 2020 election. 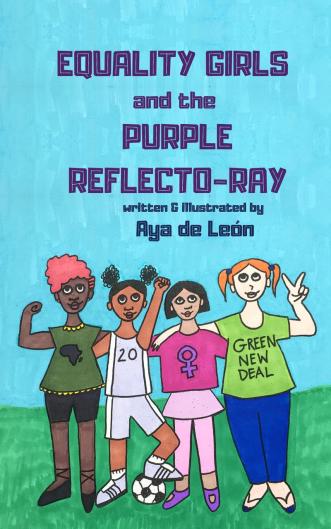 EQUALITY GIRLS AND THE PURPLE REFLECTO-RAY: Fourth grader Daniela Santiago gets knocked out in a freak accident involving her dog, a laser and a wad of grape gum. She wakes up with a strange superpower! Now, when she sees girls being excluded or put down, she gets so mad that things get out of hand. Purple laser rays shoot from her eyes and mean boys get a taste of their own medicine. She gets mad once again hearing news reports that the president refused to sign the Gender Equality Bill. Can Daniela and her friends find a way to use her power for good? When the president comes to judge a tween beauty contest, they might just get their chance!

When writers have children, we suddenly find ourselves reading a ton of children’s literature. Board books. Picture books, then chapter books. We read aloud to our kids, we play audiobooks for our kids. They get older and begin to read their own books. And if you are like me, you preview some of those books

And as a writer mom, I’ve definitely thought: hey, I could write a book like this.

But the writer mom is also unrelentingly busy. I’ve been publishing a book a year since 2016, and the children’s books just didn’t seem to rise to the top of the priority list. But this year, Kensington Books pushed back the publication date for my forthcoming adult spy novel. Suddenly, I had a summer where I wouldn’t be promoting a commercially published book.

And then there was the presidential election. I have vowed to focus all my energies on the Green New Deal and on ousting Tr*mp. I realized that there was a book I had been sitting on, and it was time to publish. It was too short a timeline to attempt to commercially publish, so I needed to self-publish.

EQUALITY GIRLS AND THE PURPLE REFLECTO-RAY was a book that I started a couple years ago in response to the books CAPTAIN UNDERPANTS and SUPER DIAPER BABY. Both books were laugh-out-loud funny, and I enjoyed the stories. I particularly loved the bromance in the CAPTAIN UNDERPANTS movie. However, the books were completely about boys. There were no significant female characters at all. This is no shade for the writers of the series. I love the books. But I wanted something equally funny that focused on girls. In the realm of TV, I have to say I LOVE Harvey Street Kids.

It’s the zany, gross-out, manic version of this same type of humor for girls. I wanted to write a book that would be just as fun.

One of the critical questions I had to ask myself about was this: what would the humor be about? The CAPTAIN UNDERPANTS brand unabashedly revels in potty humor. But I wanted political humor. In our culture, so much of the humor does what we call “punching down,” making fun of people or communities that are already targeted. Fat jokes, racist and sexist jokes, homophobic jokes. I wanted to punch up. But how to punch up at sexism for kids?

When my younger sister was a teenager, I recall how she and her friends would joke about sexism. Teen girls are bombarded with sexual harassment, belittling of our thinking, media lies, mean girl drama, and they need to keep their spirits up, as well as keeping perspective on reality. If teens are to believe the cultural narrative, they are ugly, flawed, unlovable creatures who must invest heavily in fashion, beauty products, dieting, and documenting it all on social media. Maybe, if they are relentless, good, and lucky, a young man might choose them—which will magically make their lives worth living.

I even recall in my own teenhood, having running jokes with friends that were ultimately about sexism. Although I grew up in an era before social media, the underlying message was the same: you are unlovable; you must starve and buy things to fix yourself; you will have succeeded when you have a boyfriend.

But how could I tap into that humor in making fun of sexism for younger girls, say age 8-11?

I wanted the sexist boys to be ridiculous. I wanted my audience to be able to laugh at them—at their sexism in particular. I don’t remember how I got the idea, but what if a girl had the power to make boys act out their sexist ideas about girls? I knew I was treading a fine line. There’s a history of ridiculing male characters who act feminine. The “guy in the dress” trope is tired, and often either homophobic, transphobic, or both. But what if the humor wasn’t about them acting feminine, but acting out their stereotypes about femininity? We could be laughing at their ridiculous sexist ideas! Thus, the idea for the REFLECTO-RAY was born. Daniela, my protagonist, acquires some strange superpower, whereby rays shoot out of her eyes when she gets angry about boys being sexist. The first time it happens, a pair of boys exclude the girls from their soccer game. Here’s an excerpt:

The boys laughed with those extra loud HA HA HAs that people kind of yell-laugh to be mean.

Daniela did not think it was funny at all. She got mad. Really mad.

Daniela could feel the heat in her face, in her jaw, the anger boiling in her brain. When some people are mad, they see red. But Daniela saw purple. It was as if her head was a teapot filled with purple tea that had started to boil. And if you put too much water in a teapot, when it boils, it’ll boil over. And that’s just what happened with Daniela. Suddenly, she boiled over: the anger exploded, and bright purple rays shot out of her eyes! 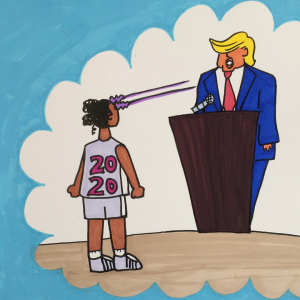 I started with a pair of 7th grade villains who won’t let the girls join their soccer game. I moved on to an adult man who produces puppet shows with tropes of helpless princesses getting rescued by knights. And then I seized upon the idea of having a sexist president as the ultimate villain. It was fun to imagine my heroine getting angry when he refuses to sign the gender equality bill—a bill that would guarantee that women, men, and non-binary/trans folks would be treated equally under the law. Which, of course, led to the idea that she would eventually need to confront that president. Why not at a tween beauty contest?

One of my favorite scenes, the one that had my daughter and me laughing the hardest, was when Daniela and Jalisse have to explain what a beauty contest is to Kerry and Malaya. The latter two girls just can’t seem to wrap their minds around it for a while, because it’s actually so absurd. Here’s another excerpt:

“So what?” Jalisse said. “We’re just supposed to let this so-called president go around saying men are better than everyone else?”

“Not just saying it,” Daniela said. “Stopping laws from making sure everyone’s equal.”

“But he’s not coming to talk about that,” Kerry said. “He’s coming to judge a swim competition.”

“Duh,” Kerry said. “Of course they’re gonna race in swimsuits. It would slow them down if they wore regular clothes in the pool.” 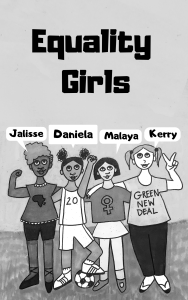 “Well then how do they swim?” Malaya asked.

“They don’t,” Daniela said. “They just stand around.”

“But then how is it a competition?” Kerry asked.

“The judges just look at them,” Jalisse said.

“While they do what?” Kerry asked.

“Nothing,” Daniela said. “They just judge them on their bodies.”

While the book is filled with humor, the emotional core is about girls learning about sexism, and learning that their rage and resistance is a powerful force. The girls lean on each other, and through community and solidarity, they keep from internalizing the worst of the sexist messaging. Also, with four girls, I wanted to show a range of relationships to femininity—from “tomboy” to “junior fashionista.” They have found many different ways to be girls and they all get to be connected without having to be the same

Ultimately, I decided to publish the book this year, because the unnamed president is inspired by our current times. I deeply hope that in 2021, the book will be dated, because we will have a different president. I am deeply disappointed with the Democratic Party’s presumptive nominee, and how much he appears to be a misogynist. But I am still prepared to reframe him as a harm reduction strategy against fascism. The thought that we would have the same president next year is unthinkable. But beyond that, I wanted this book to be part of the resistance to sexist male authority, to be part of the wave of female rage that has been rising since 2016. A cute and funny book that will be even cuter and funnier next year after we have a regime change.

This entry was posted on May 28, 2020 by Aya de Leon in NEW RELEASES, Parenting, writing.