Given all that’s going on in Puerto Rico right now, with the people rising up against corruption in government, I couldn’t find words for it. But I was inspired by all the artists–including Bad Bunny, Residente, and Ricky Martin–who were dropping what they were doing to join the protests in PR. I woke up this morning imagining what my character Delia Borbón’s would have to say. Delia Borbon is a celebrity character from my Justice Hustlers series. She appeared briefly in the debut novel of the series UPTOWN THIEF, but really emerges as a full character in my latest Justice Hustlers heist book SIDE CHICK NATION, the first novel published about Hurricane María in Puerto Rico. In that story, she walks off the set of a movie she’s filming in order to help with hurricane relief. This morning, I woke up imagining her doing something similar for the protests, so I wrote this short-short story about it. Enjoy! Y pa’lante! 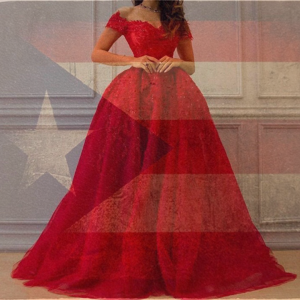 Delia Borbón had been in Buenos Aires, filming a new movie, when she learned about the massive protests going on in Puerto Rico. She sat at her mirror, surrounded by costume, hair, and makeup artists buzzing around her like bees. She was filming a romantic comedy, and they were set to shoot the ballroom scene. Borbon had on a red silk gown, her full bust nearly spilling out of the top, and her already narrow waist cinched by the corset. It was always tough to breathe in costumes like these, but now her breath had stopped for a different reason.

Her heavily lined and thickly lashed eyes were glued to her phone, as a steady stream of photos, videos, and tweets chronicled her people all over Puerto Rico taking to the streets to demand the resignation of the island’s Governor, Ricardo Roselló. The man had been unpopular since his lackluster response to the hurricane. But this latest catalyst was nearly 900-pages of messages full of profanity and hateful language from a group chat that was administered by Governor Roselló, including plotting against political rivals, and other misdeeds. The island had erupted in a mass campaign of protests, calling for him to step down with the hashtag #RickyResign.

“Ms. Borbón,” her assistant called her for a fifth time. Finally, the star looked up.

The assistant gently took the phone from her hand. “They’re ready for you.”

“To shoot the scene,” her assistant said. “The ballroom scene.”

Borbón shook her head, as if recalling herself. “I can’t shoot today,” she said. “Puerto Rico needs me.” She stood up, took her phone, and began to walk off the set, in full costume.

The assistant ran to the director, who hustled after Borbón.

“This is breach of contract,” the director said. He was Canadian, and had wanted Scarlett Johanssen to play the role. But the Latinx community had protested. Johanssen wasn’t Latina. And was too young, anyway.

“My agent can figure it out,” Borbón said over her shoulder. “She solved it when I walked off the set during Hurricane Maria, and she can do it again.”

“A hurricane is an act of God,” the director said. “There’s language for that in your contract. There’s no language to protect you this time.”

Borbón stopped and turned around. “First of all, that hurricane wasn’t an act of God, it was an act of war, part of the collateral damage of the climate crisis, brought on by the fossil fuel industry. And second of all, the word hurricane comes from the Taino word, juracán. That’s the language I have for you. Because right now, there’s a juracán of Puerto Ricans in the street, ready to knock one particular house down, and it’s about time. I need to be with my people.” 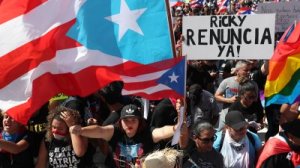 Forty-five minutes later, she stood at the press conference podium in front of twenty microphones. She wore full makeup, and her hair was swept back in a bun, with a small Puerto Rican flag sticking out. She still had on the red dress, and the director was on the phone to his attorney, adding that to his list of complaints against Borbón.

The press conference was mostly gossip magazines and entertainment reporters. Borbón’s younger white male co-star had mouthed off angrily when it came out publicly that she was getting paid more than him. Rumor had it that he had signed on when it looked like he’d be playing second fiddle to Johanssen. The reporters had come down to sniff out a story. Now that she had walked off the set, he was even more outraged. He called her a primadonna on twitter.

“How do you respond to the label primadonna?” a reporter from The National Enquirer asked.

“I think the proper word is diva,” Borbón said. “I’ve earned it. I’ll claim it. He’s mad that he’s getting paid less. But I’ve got twice as many scenes and three time as many lines as him. He expects more money because he’s got a penis? I don’t think so.”

A ripple of laughter went through the room.

“So let’s talk about name calling,” Borbón went on. “Women who stand up for themselves get called names. ‘Bitch’ is a favorite. So is whore. And when Puerto Rico’s Governor Roselló called Melissa Mark-Vivertio from the NYC City Council a ‘puta,’ he was continuing in that proud misogynist tradition.” She looked out at the reporters, and some looked confused.

“That’s ‘whore’ for those of you who don’t speak Spanish,” Borbón said. “Another class act name he came up with was ‘cocksucker.’ And everybody who knows my history knows that I was a stripper and the economic pressure of that job had me offer the occasional sexual favor for cash. So I know something about these labels, and I know how hurtful it is to be publicly called those names. But this isn’t about how Roselló is trash in what he says about people. This is about what he does.”

She took a shallow breath, her her bright red lips tight.

“Because there’s one word that Roselló didn’t use in those 900 pages of leaked texts to his cronies, and that word is pimp. And the people of Puerto Rico are in the streets because Rosseló and his father before him are straight up pimps. Selling out Puerto Rico to anyone who wants to come and violate us, from US corporations to the US Navy in Vieques, to companies dumping their toxic waste on our island, to the fiscal control board, to the current wave of gentrifiers who want to sweep our people off the island and turn it into a playground for rich Yanquis.”

The corset was too tight. She couldn’t quite get enough air. “And the people of Puerto Rico are saying ya basta—enough already! Roselló needs to go because he and his cronies are pimps. Profiting off the degradation of our people, our economy, our environment, and our land. Taking advantage of our vulnerability in our colonial status to sell us out over and over again.”

She needed more air. She wanted to breathe to calm herself down, but there would be no calming.

“Joking,” she said, spitting the word out as an accusation. 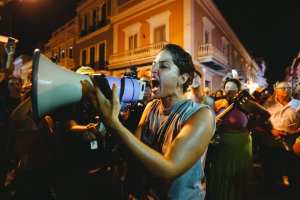 “Joking about dead bodies in the morgues on our island after Hurricane María?” Her voice broke, and she put a fist to her mouth as if to hold the tears in. “It was bad enough when he colluded with the low estimates of how many people had died. But to joke about it? He has no respect for his people,” she said, her voice thick with the tears she refused to shed.

“And we are not having it anymore. We are not! Fucking! Having it! No movie is more important than the story unfolding in Puerto Rico right now. So somebody needs to start writing the screenplay now, because I will be playing myself.”

With that, she turned and swept off the podium, wiping beneath her eyes with the tips of fingers done in red lacquered nails. She strode out the door and to the curb, where a car waited that would take her to the airport. The reporters ran after her with questions:

But the star just waved them away, pulling up the full skirt of the red silk ballgown as she climbed into the dark sedan. But she pulled the Puerto Rican flag out of her hair and waved it triumphantly, before closing the door and speeding off to the airport.

One comment on “Delia Borbón & the People of Puerto Rico vs. Ricardo Roselló: a #RickyResign short story”

This entry was posted on July 17, 2019 by Aya de Leon in Uncategorized.