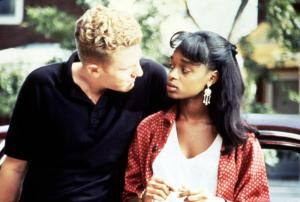 There’s an essay that’s been brewing in my head since the 1990s. Zebrahead, was the film that taught me how movies lie. Zebrahead is a 1992 drama film about interracial romance, produced by Oliver Stone, written and directed by Anthony Drazan and starring Michael Rappaport and N’Bushe Wright. I saw it at an indy movie house years after it was released, but I’ll never forget that moment.

The white boy’s father was referred to in reviews as a “womanizer” by Roger Ebert in a review. That’s way too generous. I would characterize him as an outspoken misogynist who is obnoxious and toxic throughout the film. But there is a moment, after his white son and the black girlfriend have sex (I think for the first time) and have fallen asleep on the boy’s bed with the door half open. The obnoxious misogynist father comes home while they’re sleeping and looks in at them, and I recall him gently closing the door.

For me, as a black girl, I recall thinking: this film is telling me that I will be safe in this house of predatory white men, that I can trust them, that no one will take advantage of my moments of vulnerability. This is a lie.

Maybe if the dad hadn’t been such a misogynist, had been tender throughout the film, it would have been believable. But instead, something clicked in my head at that moment: film is a medium dominated by white men, who spin many different fantasies about themselves, women, sex, race, and power. They cast white men as the caring and justified heroes, regardless of the realities in the world.

Thanks to media scholar Carole V. Bell for inspiring me to finally write this!

This entry was posted on January 19, 2018 by Aya de Leon in Uncategorized.