Too Late To Apologize: a therapy referral for cheating comedian Kevin Hart

So comedian Kevin Hart got busted cheating on his current wife who is pregnant. A short while back, he was denying the rumors. But—allegedly—someone threatened to release a sexually suggestive video of Hart and some woman if he didn’t pay millions. Apparently, instead of allowing himself to be extorted, he came clean with his family and his public. This has impressed some of his fans, but it hasn’t impressed everyone. I, for one, am decidedly underwhelmed.

And I was already underwhelmed by Kevin and his comedy overall, which is often sexist. Men like Kevin who become celebrities, are insecure and crave attention. I understand. I’ve been a performer. I know what it’s like to have hundreds or even thousands of people laughing at my jokes, cheering, or applauding for me. It’s intoxicating. It distorts your sense of your own importance. And the attention is addictive. Performers fiend for attention and approval, and we want it in our private lives, as well.

Male celebrity performers have access to unlimited female fans who want to fawn over them and have sex with them. Sometimes they change things up within the pattern by marrying a woman who is generally expected to offer a flowing river of emotional support, sexual comfort, and arm candy. Who wouldn’t want that? As a female performer, I certainly did. But no guy rolled up and offered me that package. Yet famous or even charismatic men get those offers all the time.

But there’s a problem with the constant-attention-from-your-wife plan. There’s a problem with relying on sexual caretaking to soothe your ego. Sex can lead to pregnancy, and pregnancy can lead to a woman actually focusing on her baby, not the man-baby that she’s married to, who still needs to be breast fed on demand. So insecure men cheat. They don’t have the emotional bandwidth to not be the center of their wife’s attention for the initial nine months of pregnancy and then share the homefront spotlight with a baby. The celebrity husband becomes like a toddler with sibling rivalry. “That’s my mommy!” So he has an affair. “I’ll get a new mommy!” And I feel compassion for anyone who’s a walking wounded guy with a black hole of emotional need inside. I feel empathy for anyone going through withdrawal from his source of comfort and left to face himself. But there’s a time to grow the fuck up.

Kevin Hart has probably also apologized to his family in private. He has also posted a big public apology video. And here’s the problem. It doesn’t really matter what he does in public. He needs to do something else in private. That something else would be to get help. He needs a therapist or a sex addiction recovery program or something to help him figure out why all the fame and money in the world and the big house and lovely, much younger wife aren’t enough. Why he has to jeopardize his family with some adolescent behavior. Because all the accolades in the world will never be enough. Insecurity isn’t healed by people laughing at your jokes. Or people paying you big money to have people laugh at your jokes. Or by having a supermodel wife who hangs on your every word and will blow you on demand. Insecurity is healed by going back to the difficulties in your early life: picking apart your shitty childhood, and crying about what it was like to be the kid with the dollar store sneakers or the fucked up mixed girl hair or the alcoholic mom or the abusive dad or the bullying peers or the foster home nightmare, and clean that shit up at the root.

Because until Kevin Hart does, he will always be vulnerable to the shiny attention of some sexy young woman, because that dollar store sneaker kid inside will still be in awe that a “girl like that” could be attracted to a “loser like him.” And unless his wife is a 24-7 fountain of adoration, arm candy and sexual attention (which no woman can be or ever should have to be), this will happen again.

Not only do I have personal experience with the lure of approval as a performer, I also write about male performers who have faced some of the challenges Kevin Hart has faced. In my latest novel, The Boss, the love interest is rap star Thug Woofer. [SPOILER ALERTS] 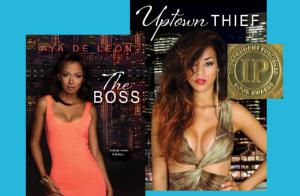 He’s attracted to the protagonist, Tyesha, a former escort, the current executive director of a women’s health clinic, and part of a badass female heist crew that redistributes wealth. She’s a supportive and loving girlfriend, but she doesn’t have the time or inclination to dedicate herself to making Thug Woofer’s life more comfortable, to stroking his ego, to putting him first. In Tyesha, he has the opportunity to have a partner who is an equal. And it takes him two books to get there, because he has to work through his sexist sense of entitlement with her. Originally, in my first book, Uptown Thief, he feels entitlement to sex, but ultimately it’s just a sign that he feels entitled to have all his desires in the center of their relationship. In order to be able to show up as an equal partner, he has to do a significant portion of emotional work. He explains that he’s not going to be perfect. Kevin Hart said the same thing. Men apologizing often explain that they aren’t perfect, that they’re flawed. But Tyesha doesn’t demand perfection from him. I don’t believe that most women with male partners want perfection. Men can make mistakes and still be worthy of their relationship. But it’s not enough to say: “I messed up. I’ll do better.” A man in this position has to do the emotional work to have the capacity to actually follow through. Not just right after he messes up and feels the shame of it, but later, when the shame has worn off and he’s feeling resentful toward his partner, and ready to have his pride soothed by a bikini model. He needs to become the man who isn’t dependent on others for his self esteem. Not the cheering crowd, not the nearest hot chick.

The saddest thing about Kevin Hart’s public apology is that it’s not really for his wife and family at all. It’s a bid for more attention from his fans. Now they can “support” him by talking about how “brave” he is to “admit his mistakes.” But ultimately, this is just enabling the pattern.

Kevin, that baby deserves better. Your wife deserves better. But above all, you deserve better. I don’t like your comedy, but from one black artist to another, you’ve worked hard, and built what could be a really good life. Do some emotional work so that you can grow up and enjoy it.

This entry was posted on September 19, 2017 by Aya de Leon in Uncategorized.