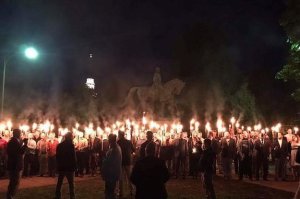 In the US, the original job description for white supremacy outlined two main responsibilities. The first was to justify the vicious mistreatment and brutal exploitation of people of color—Native genocide and African slavery. These days, white supremacy continues this legacy with the second class citizenship status of people of color, the lack of valuation of POC lives, especially black folks, and the continued blaming of POC for all our troubles. White supremacy suggests that any persistent problems in our communities aren’t caused by structural racism, rather by our inferiority, laziness and poor choices. But the second responsibility of white supremacy ideology was to pacify poor white people, who were being mistreated alongside people of color by rich white elites. This ideology was critical to keep them from uniting with their peers of color by offering them the promise that no matter how downtrodden they might be, they were always superior to people of color. Which explains the current presidency, in which white people being crushed by an economy beholden to corporate billionaires, have elected one of them as their king.

His election and his cabinet selections have emboldened white supremacists, who marched unmasked in Charlottesville, VA this weekend. For many, this is a frightening wake up call. But for others of us, this is a chilling validation of what we have long known: black president or not, racism never went anywhere. And now the nation and the world can see the underlying sewer of hate that has flowed underneath this nation since its founding. I believe this unmasking is a frightening and painful form of progress, because we can’t address what we can’t see or refuse to see. And I agree with others who have pointed out that this resurgence of white supremacist ideology is a backlash against the real gains of POC since the 1960s. As Eric Ward said in his brilliant recent article on white nationalism: “The successes of the civil rights movement created a terrible problem for White supremacist ideology. White supremac[y]—inscribed de jure by the Jim Crow regime and upheld de facto outside the South—had been the law of the land, and a Black-led social movement had toppled the political regime that supported it….Muslims won billions of converts to Islam…” as well as other huge challenges to white supremacy, such as “the boundary-crossing allure of hip hop…[and t]he election of a Black president.”

All of these changes don’t mean that racism is over. But white supremacy’s old order is dying. The marchers in Charlottesville were ostensibly protesting the impending removal of a statue of Robert E. Lee. In other words, after the Civil War, the South was allowed to keep its symbolic glorification of white supremacy’s good old days. But now, people of color have developed enough political power and white allies to be attacking even this symbolism. These are the symbols that spoke directly but silently to these racist white people who were drowning in class oppression: sure, these uppity black people have gotten out of hand, but the powers-that-be still validate your white supremacy, and here’s a statue to prove it. Like sending jewelry to your side chick after you snub her at an event you attend with your wife. It was always a pacifier. Now, black people and our allies are insisting that even these symbols get taken down. And white racists are furious.

This is a tantrum. A very dangerous one, but a tantrum. As a mother, I never used a pacifier, but I know many parents who did, and it is hard to wean a kid from that binky. Unlike a toddler or small child, white supremacy is deadly, and decidedly emboldened by having support from the president. It is a dangerous moment. But I don’t want to return to the old strategy of pacification, because I don’t want white supremacy to be pacified. I want it to be eliminated. To that end, I think we need to be fighting on many different fronts right now. We need to resist Tr*mp, we need to push back against white supremacy, and all the while, we need to work to put progressives in power to lead and govern in the service of working people instead of the wealthy and corporate elites. You can’t reason with racists based on logic. But if progressives can get into power and start to alleviate the economic woes and difficult living conditions for all working people, we can establish a counter-narrative to the scapegoating of POC. Because the more insecure and unstable that racist white people feel, the more violently and irrationally they cling to the second promise of white supremacy: no matter how downtrodden you are, you are always better than the coloreds. I guess I should add: and you are always free to act out your rage on people of color (and their allies), as we have seen.

I think there has been a great deal of confusion around the call to empathize with the plight of angry white racists. Yes, we need to sympathize with the plight of all working class people, and respond by developing strategies that end the economic exploitation of working people for the benefit of corporate greed. But there’s some conflation between sympathizing with the class oppression of white people and coddling their racism.

Tweet by Alicia Garza, one of the founders of the Movement for Black Lives

In order to move forward here, we need to dispense with these configurations of white working class vs. people of color. The working class is largely made up of people of color (like me–I’m a member in good standing of two labor unions). As many of you know, I have been very moved by Steve Phillips’ book Brown Is the New White: How the Demographic Revolution Has Created a New American Majority. His research shows that progressive whites and people of color are a New American Majority, and we can win any election for Democrats if we take bold, progressive stands and have a strong community organizing ground game. I have no illusions about the Democratic Party. They aren’t our saviors. They won’t bring the deep institution transforming progressive changes. However, this electoral strategy will create the conditions in which progressives can build the movements that will bring the changes we desperately need and that our communities deserve.

And it is these movements that have brought the transformation that has enraged white supremacy. We are watching them lash out and flail. Now is the time to fight even harder, and hold in our hearts that we are gaining ground in the war to eliminate white supremacy, and that eventually we will win.

This entry was posted on August 14, 2017 by Aya de Leon in Uncategorized.