COVER REVEAL!! Mixed Feelings: I love the cover of my new novel THE BOSS, except the heroine isn’t supposed to be lightskinned 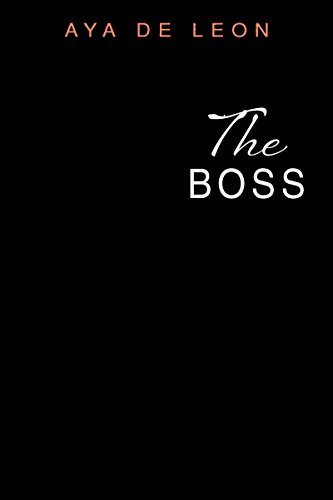 Some of my friends have published literary novels with imprints of big corporate publishing houses. They get original artwork for their book covers, and they get final approval. Other friends of mine are self-published or have hybrid publishers like SheWrites. They get to design their own covers (I would LOVE that). I, however, am fortunate to have my Justice Hustlers series with Kensington Books, a large, independent, commercial publisher. Overall, Kensington is a great fit, but they don’t have the big budgets to do original artwork, or to go back and forth with each author until we like every single detail of the cover. The way it works at my press is that my editors ask me for a general idea of what I might like, and then I get a cover several months later. From there, it’s a lot like what my kid’s first grade teacher tells her class: “you get what you get and you don’t get upset.” And I’m not upset with my new book cover. I just have mixed feelings.

Tyesha Couvillier, the protagonist of THE BOSS is supposed to be chocolate-skinned, but the book’s cover model is a light brown. Not only is she described in the book as dark brown, but I also specifically asked for a dark brown cover model. And I didn’t get one.

Yet, I can’t blame the press for my dissatisfaction with the cover image. Kensington works with stock photography, which has many challenges in representing black people. In a 2015 article in the New Republic, Hannah Giorgis quotes one scholar as saying that “the majority of black stock photos just look straight-up goofy and low-key embarrassing.”

THE BOSS isn’t my first book, but it is my first time facing this problem. In my debut novel, UPTOWN THIEF, the protagonist was Puerto Rican. My editor at the time, Mercedes Fernandez, said that would be an advantage in stock photography because we would have access to more options. We might find an image of a Latina woman, a lightskinned African American woman, a multi-racial woman, maybe an Asian woman, or even a brunette/tan white woman that could work for the cover. However, when it comes to darker women of African heritage, she explained that the choices were much more limited. She shared some of the pitfalls of using stock photos, particularly for black books: sometimes the model has the right fashion look, but the expression doesn’t fit. Or the outfit or the hair is wrong. Or she just doesn’t have the right attitude. Or sometimes you find a great stock photo, but it’s been used on another black book cover, because there are just so few good images.

Also, the Justice Hustlers series is very sexually charged so the cover models are all expected to look conventionally attractive in a sexy way–so far that has meant serious cleavage. In fact, there was so much cleavage that I initially had concerns about showing UPTOWN THIEF to my daughter, who was five years old when I first saw that cover design. I wrote about that quandary in FlavorWire.

So now for the big reveal: here’s the cover of THE BOSS…ta da!

The designer changed the model’s hair a bit, but otherwise, this design uses the original stock photo. I wish they could have also darkened her skin, but that’s not as easy as changing a hairstyle. I love the colors of the dress and the glittering city background. I love the font and the design overall. I love the attitude and expression of the model. I just don’t love that she’s lightskinned.

The model reminds me of a friend who is multiracial, with a black and a white parent. As a multiracial woman myself (with a Black and a Latina parent), I don’t have anything against multi-racial beauty. But in a context of anti-black racism, a narrow range of multiracial black women’s beauty is often trotted out in situations to stand in for black beauty overall. Not to say that we are not black, but in a racist and colorist society, we are the lighter, more acceptable brand of beauty that stands in for a more inclusive range of black beauty.

This is one of the reasons that Viola Davis and Lupita Nyong’o are so important. Because prior to these two women, there were very few black women in media who were A) as dark as they were and B) seen as protagonists, romantic leads, complex characters, and desirable (even though Nyong’o’s first blockbuster role was CGI). I have written about colorism on a number of occasions in different outlets. Our country does appear to be making some slow progress, but the stock photos definitely have not caught up.

In a quick search of stock photos for “beautiful African American woman,” I see photos of mostly lightskinned women. And there is a particular way that darker skinned black women get hypersexualized at the intersection of sexism, racism and colorism. If I search for “sexy African American woman,” I get lots of oiled up black women in their underwear and bikinis. I also get women in tiny dresses and super high heels who look like they’re going to the club. These are the same photos that my book’s designer would have come across, and none of these would work for this book. It’s not that I have anything against boudoir photos. In my last book, I actually bought a stock photo image of a black woman in lingerie to represent Tyesha in promo materials. In UPTOWN THIEF, she was an escort, and it made sense. But in this second book, she has stopped working as an escort and has become the executive director of a women’s health clinic. She’s THE BOSS. She needs to be ready for the workday, not just the drink after work or the bedroom scene.

And when I look at the cover of THE BOSS, I do feel as if they’ve captured the essence of Tyesha: young, black, confident, sexy. The model is much thinner than Tyesha would likely be. In the book, she’s a size 12. But I like the boldness of cover model’s expression and the bright color of her dress. She looks ready to take charge and have fun while doing it. Which is good, because Tyesha has a lot to deal with. As the book opens, her family from Chicago has just arrived unannounced in New York City, including her catty sister, her sister’s man who’s a drug kingpin, and her teenage nieces who are in crisis. Meanwhile, on the job, Tyesha will find herself helping a group of strippers to unionize, and all of them will find themselves threatened by the mob. In response, Tyesha will also be masterminding a dangerous heist that could secure the union’s future. And finally, she will have to deal with the return of Thug Woofer, her rap star/bad boy ex- who is bringing flowers and professing that he’s changed. But can she trust him?

So here’s the cover. The rest of book will be out on May 30, 2017. I’ll leave it to you to tell me whether you can judge the book by this image or not.

One comment on “COVER REVEAL!! Mixed Feelings: I love the cover of my new novel THE BOSS, except the heroine isn’t supposed to be lightskinned”

This entry was posted on March 2, 2017 by Aya de Leon in Uncategorized.