Attention Democratic Party: that Conservative Swing Voter? He’s Not That Into You

He’s just not that into you. This white swing voter you met on Tinder. He acted like he might want something serious that first time before he got into your draws. But his intentions are not honorable. I know you got VP Biden telling you this guy is some kind of catch, but you’re gonna take dating advice from Biden? The man who hung Anita Hill out to dry in the 90s? He’s not gonna be on the right side of history on this one, either.

Yes girl, I know you get texts in the middle of the night from that swing voter guy, WYD;) Sometimes he might even ask how your day went. Not that he actually listens to your answer. Cause he’s not relationship material, boo. You might be a side chick, at best. He’s only serious about his racism and sexism and aspirations to be one of the 1%. Yeah, maybe he’ll come by your apartment late at night when the right-wingers aren’t treating him well. But the moment they dog whistle, he comes running.

People talk about him like you gotta love him if you love the working class. I know he says you’re some stuck up, latte-drinking coastal snob if you don’t answer his 2AM texts, but he and his type are just trying to manipulate you. Telling somebody “no you can’t come over” isn’t talking down to them. It’s called a boundary. Don’t let him mansplain that he needs to get in your bed in the name of the working class. Plenty of brown folks in the working class. And white progressives, too. And women. No, we don’t need to compromise more with racist misogynists. I think we can all see now that that’s been a losing strategy.

And you don’t need him, girl. You got the New American Majority on your side. People of color plus progressive whites are all you need to win elections. But how can POC be down for you when you’re over her chasing this reactionary clown. You water down your platform so you won’t “scare him away” with your calls for police accountability and affordable childcare. Girl, bye. That fool is already away. Stop sitting by the phone and waiting for him to call and go hang out with some people who really like you. Who get you. Who want the same things you want. Racial justice. Closing the wealth gap. Equal rights for women and LGBT folks. A path to citizenship. A social safety net. I’m serious. We can get control of congress in 2018 if you’ll just get down with this New American Majority strategy. Girl, you don’t need to spend one more night sitting around with him and his buddies pretending to like “The Apprentice” so you can get laid. You really are not that desperate.

And the time is now. You need to get some new leadership. Yes, girl, some younger, browner leadership. And get off Tinder; it’s way too sexist. Try Bumble. The girl gets to pick. And while we’re at it, you need to swipe left on some of those white consultants you hired to run your campaigns and swipe right on some new brown ones. 97% of the firms who consulted on your campaigns were white people. Oh you didn’t notice? Well Steve Phillips noticed. He did the math. Yes, I said 97%. And you wonder why people of color didn’t come out and vote for your party. You brought a bunch of suburban white boys in suits to the hip hop show and wonder why nobody asked you to dance. 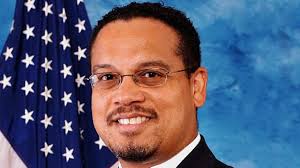 Ooh! Look at this profile! Keith Ellison? African American… Muslim… Congressman from Minnesota. And he’s got experience community organizing. Now this is what I’m talmbout. And he’s thirsty to be the DNC chair. But, you know, thirsty in a good way. You need to snatch him up, girl.

Here’s what he says in his profile:  “I am honored to have the support of hundreds of thousands of people across the country who want a unified Democratic Party. We must come together to fight Donald Trump and his cabinet of billionaires and lobbyists who are dead set on rolling back progress for working families, the environment, and our health…It is going to take a nation-wide grassroots organizing effort with millions of people going neighbor-to-neighbor. But we will do it together, and we will win.”

Sounds good, but you know, people lie on the internet, so let me look him up. Whaaat? This man is legit. “Minnesota’s 5th Congressional District has one of the highest rates of voter turnouts in the nation. In 2015, Ellison unveiled the Voters First Campaign, which aimed to increase voter turnout through grassroots organizing, campaign coordination, and low-donor fundraising.”

It’s a wrap. This is your man, honey.  So can you PLEASE stop chasing that white swing voter. Sorry boo, he’s just not that into you.

On a serious note, the Democratic Leadership is being chosen NOW.

***Sign the letter*** put forth by Democracy In Color demanding more diverse leadership in the Democratic Party.

Check out these articles by and about Steve Phillips, author of BROWN IS THE NEW WHITE: How the Demographic Revolution Has Created a New American Majority

“It’s Time to Diversify the Democratic Party Leadership” The Nation

3 comments on “Attention Democratic Party: that Conservative Swing Voter? He’s Not That Into You”

This entry was posted on December 16, 2016 by Aya de Leon in Uncategorized.