UPTOWN THIEF is out today 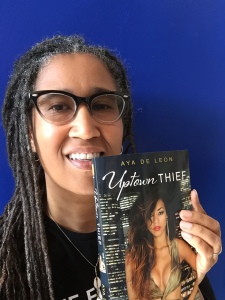 When I started writing my debut novel UPTOWN THIEF eight years ago, I was supposed to be working on a non-fiction book. But something about this story kept  calling to me. This Robin Hood heist novel of badass women robbing corrupt rich guys to support a clinic for sex workers lured me away from the more respectable project to a wild hybrid vision that was equal parts romantic steam and radical solidarity.

I began writing it on a plane from the East Coast to my home in California. At that time, I had no idea that three months later, I’d be pregnant and my life would be turned upside down.  It was a welcome change and a deeply wanted pregnancy, but motherhood meant saying goodbye to the performing artist life I had built. And yet the vision of that book has been the biggest throughline between the old and new me–before and after becoming a mom–this vision of this community of women with messy love lives battling to change the world.

UPTOWN THIEF is finally out today! Thanks to all who’ve supported. It takes a village.

This entry was posted on July 27, 2016 by Aya de Leon in Uncategorized.