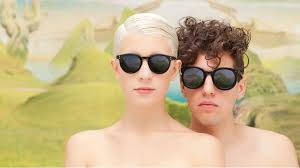 Hear, hear! to everything that’s been said about the indie band Yacht making a sex tape, pretending it was stolen and leaked, crying victim, and then claiming it was a performance art hoax. Gotcha!

Many have pointed out what a horrible disservice this is to actual victims. Many people (mostly women) are targeted when others put intimate images of them on the internet without their consent. When these people (mostly women) come forward, they sometimes face skepticism and are not believed, as is the case with sexual assault in general.

I am a bit late to the Yacht party, because I finally heard about the incident from Sarah Mirk on Bitch Media’s Backtalk podcast. What I would add to the conversation is this: explicit sexual images of people—naked or having sex—are attention-grabbing and potentially lucrative. Yet to openly offer those images or that intimate access for financial consideration is to be a sex worker. Sex workers face incredible stigma, and sometimes criminalization and danger. Outside of sex work, people (mostly women) who sexualize themselves for financial consideration face slut-shaming.

This stunt of Yacht’s is also reprehensible because it seeks to benefit from commodifying their sexuality, but refuses to do so openly. They want to exploit the curiosity of a sexually fascinated public, but don’t want to sully their hands with an actual sex tape. Like the pole dancers who appropriate stripper imagery and trade on the public fascination with strippers, but then distance themselves from sex work with expressions of disdain and contempt. In Yacht’s case, they portrayed themselves as victims, and had fans and the public upset at their manipulation. Perhaps a more interesting stunt would have been for Yacht to have made the sex tape and to have posted it unapologetically. They could have made an explicit statement that in our contemporary landscape, independent artists need to sell intimate access to their sexuality in order to make a living, just like…many sex workers. Which would have been an act of solidarity, and an interesting form of performance art. As it turned out, they just ended up infuriating fans and many in the general public. They say any press is good press, but in Yacht’s case, I don’t think so.

This entry was posted on May 18, 2016 by Aya de Leon in Uncategorized.