#FreeKesha: Rape Culture at Sony, lack of Female Solidarity, and why Corporations are NOT People

This week, recording artist Kesha was denied an injunction to allow her to get out of her contract with Sony, which forces her to make six more albums with the man she alleges drugged and raped her. Hashtags of #FreeKesha and #SonySupportsRapists have proliferated on twitter. As Emma Gray put it in HuffPost Women, “Kesha is a wealthy, beautiful, white celebrity working at the upper echelons of an elite industry. Yet, even these privileges don’t set her apart from other victims of sexual abuse…”

Recently, feminist critics have shed light on the abysmal statistics of women in positions of power in the entertainment industry. Often, their analysis focuses on three unfortunate byproducts:

I would argue that Kesha’s case reveals another terrible cost of male domination in the entertainment industry: the dangers of male mentorship. Kesha can’t get out of her contract because the laws value corporate profits over women’s well-being as a rule. However, the specifics are that she was signed to her alleged rapist’s label. That is to say, Dr. Luke was the producer that “discovered” her, shaped her career, and mentored her. Whatever Kehsa’s potential naivete at 18, it’s not as if Sony had a dozen female producers operating at the same level whom she refused in favor of Dr. Luke. We see it repeatedly in the case of Bill Cosby: ambitious young women in the industry are vulnerable to older, powerful men who promise to mentor them. As a filmmaker, Lena Dunham ran into a similar wall of sexually predatory men who wanted her as their “protégé.”

So part of what makes her contract so difficult to break is that Kesha is signed to Dr. Luke’s sub label within Sony. Twitter users have compared Kesha’s case to Zayn from One Direction, but the cases aren’t comparable. As Emily Lackey put it on Bustle, Zayn was leaving the group to go solo under the same contract with the label. Kesha wants to get out of the contract with her “mentor,” and the laws favor his power to keep her.

Part of what is painful here, is the lack of solidarity among women. The judge who denied the injunction was female. As Jezebel reported: “’My instinct is to do the commercially reasonable thing,’ ruled Shirley Kornreich as Kesha sobbed openly in the back of the room.” And yet, part of the pressure of male domination for women in positions of relative status or power is the dictate never to look soft or show any sympathy with other women. 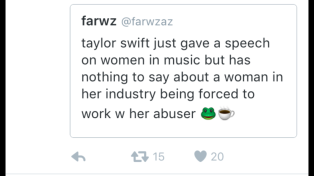 Also on the topic of lack of female solidarity, one twitter critic, @farwzaz, noted Taylor Swift’s silence on the topic in a moment when it would have made a difference (see tweet at left), and Janet Mock noted the gender gap in the makeup of Swift’s team (see tweet below). Not that it’s Swift’s job to put her neck on the line for Kesha, but what an amazing moment of solidarity it would have been had she taken it.

There have been women artists who have spoken up for Kesha. Namely, Kelly Clarkson and Lorde.

Others have noted Lady Gaga’s support, in the following tweet:

I find Gaga’s support less than impressive. She claims Kesha is “brave” and that people love her, but she fails to cast any blame on the brutality of Dr. Luke or Sony. It’s like when a man has done something shady in a relationship with a woman and his so-called apology is “I’m sorry you’re upset,” as opposed to “I’m sorry I didn’t clean up like I promised/was an hour late to our date/cheated on you/belittled you in front to f our friends.”

Further, Lady Gaga will always be a rape apologist in my eyes, after she collaborated with notorious rapist R Kelly on his “Black Panties” album. R Kelly, another famous “mentor” married his protégé, the fifteen year old Aaliyah. Her death is tragic for so many reasons. I would add that it’s a shame we’ll never get her account of what happened decades in hindsight.

Stories like Kesha’s make it more critical than ever for our political agenda to include challenging the ruling that corporations are people, and to end rape culture.

This entry was posted on February 21, 2016 by Aya de Leon in Uncategorized.