So a certain corner of the internet began rejoicing when the news came out that CBS will be doing a Nancy Drew reboot series, and she won’t be played by a white actress. I’m curious but not yet optimistic, because there are still so many things that can go wrong.

The series began in 1930, and the concept was developed the Stratemeyer Syndicate. The alleged author “Carolyn Keene” is a pen name. Edward Stratemeyer, the founder of the Syndicate, hired various women writers to create the Nancy Drew books. They initially were paid $125 for each book and signed non-disclosure agreeents to give up all rights to the work. So, in spite of having a “girl detective,” the series is very much a production of the patriarchy, both in content, and in labor practices. This is similar to the creation of Wonder Woman by William Moulton Marston. In her brilliant expose, The Secret History of Wonder Woman by Jill Lepore, she reveals how the creator was much less of a feminist than he purported to be, as was the superheroine he created.

I was actually in the middle of listening to a Nancy Drew mystery on audio—one of the original books by “Carolyn Keene”—when the news about the CBS reboot came out. I have fond memories of reading the series as a kid, so I recently listened to one to see if it would be good for my six-year-old daughter. I quickly decided that it would not.

As far as objectionable content, Nancy is repeatedly praised for her physical characteristics that conform to predictable beauty standards, including her slim body, titian blonde hair and blue eyes. Meanwhile, her friend Bess is consistently described in fatphobic terms. On the other hand, Nancy does have praiseworthy characteristics, such as being smart and fearless, traits that were often reserved for male characters of her original era. She is also altruistic, however, she is from the owning class, and her caring for those less fortunate is generally condescending and heavily classist.

Significant sexism appears throughout the series, especially when Nancy’s boyfriend Ned Nickerson is on the scene. As I was reviewing the series, I read Nancy’s Mysterious Letter, in which Nancy interrupts her sleuthing to go to the big football game and cheer for Ned who is the quarterback of the nearby elite college. Why hurry to solve the urgent case when you can scream your lungs out for a boy athlete instead? It is a scene right out of Friday Night Lights, but without any of the consciousness of the sexism involved. Picture Sam Spade taking time out of his search for the Maltese Falcon to go cheer for his girlfriend’s softball game. In a related absurd moment of the same book, Nancy and her two girl pals spend the night in the fraternity house, where none of them so much as kisses any of the boys. This plotline utterly erases the history and current problems of fraternities filled with popular football players, which are notorious environments of sexual assault. In this revisionist fantasy, the fraternity house even takes Nancy’s phone messages.

But the CBS series promises to make significant changes in the setup. Nancy will be an NYPD cop in her 30s. Presumably, she’ll have a sex life. I hope they’ll take more than just the character name. For example, a Midwestern rich girl who becomes a NYC cop would be interesting, although not unprecedented. I’ll also be curious to see which “nonwhite” actress they cast. For example, there are already so many lightskinned actresses, from Olivia Munn to Jennifer Beals* to J-Lo, who walk the line around casting and race. Sometimes they play who they are (hapa Asian, lightskinned African American, and Puerto Rican, respectively) and sometimes they play characters who are explicitly or implicitly white. Will the produces choose an actress who challenges the beauty standards of Hollywood (Lupita Nyong’o, Tatyana Ali, Priyanka Chopra) or give the show “non-white” diversity points while not particularly challenging the lightskinned beauty standards. Let me be clear: I am not questioning the of-color-ness of any lighter actresses, rather suspecting the motives of the industry professionals who use them to have it both ways: “we hired a woman of color” while the optics of the show don’t challenge racial notions of what type of women of color are worth watching and seeing as heroines. 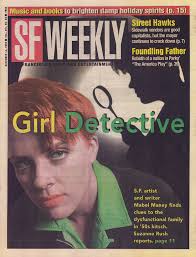 Frankly, there’s only one Nancy Drew series that I can recommend, and that’s the lesbian pulp parody from Mabel Maney in the 90s. Maney is a genius for pulling out the patriarchal subtext that was actually already present in Stratemeyer’s original, but Maney added homoeroticism, feminism, camp, and hilarity. Her trio of books have recently been re-released in print and audio: The Case of the Not-So-Nice Nurse, The Case of the Good-for-Nothing Girlfriend, and A Ghost in the Closet (A Hardly Boys Mystery). They are only surpassed by her James Bond parodies Kiss the Girls and Make Them Spy and The Girl with the Golden Bouffant.

I’m not sure what will distinguish the new Nancy Drew series, but a smart woman of color NYC cop in her 30s could go well, if we get a complex protagonist. I worry that they’ll engage in the cliché tradeoff of so many cop shows: a preoccupation with violence against women. But I’ll reserve judgement. Unless this woman of color shows up with Nancy’s trademark titian blonde hair. That’s pretty much a deal breaker.

*I can’t possibly discuss cop shows and Jennifer Beals without mentioning The Chicago Code, a brilliant TV show that got cut after a season.

This entry was posted on February 18, 2016 by Aya de Leon in Uncategorized.