This Thursday, I’m thrilled to be performing at the book launch of Steve Phillips’ Brown Is the New White: How the Demographic Revolution Has Created a New American Majority. The book is a call to action for Democrats and Progressives – According to his research, progressive whites and people of color constitute a majority of voters now, but we will lose if we do not prioritize voters of color in 2016 and beyond. It was recently reviewed in The Root.

In his book, he drives home the troubling fact that despite evidence that progressive whites and people of color—the New American Majority—make up 51% of all eligible voters—most progressives and Democrats continue to waste millions of dollars chasing white swing voters.

I am delighted to come out and perform at the book launch; I’ll also be buying a copy when it goes on sale this week. The official release date is Tuesday, February 2nd.

Voting is a complex issue in general and particularly so for people of color. As a working mom writing a book, I’m always a few years behind in watching films. I recently saw Ana DuVernay’s brilliant film Selma, and so I had this brutal struggle in my mind when I came across a conversation on Black Twitter about voting.

This intrigued me, because I grew up with an elected official for a mother. My mom, Anna de Leon, was the first Latina elected to the Berkeley Board of Education. In a local race in a small city, every vote counts. I grew up never questioning the importance of voting. When I learned about the Civil Rights Movement, it just reinforced my commitment to voting, knowing my ancestors had died for it. 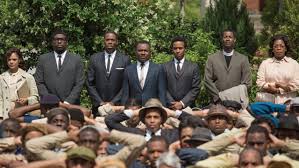 A still from Selma

And yet I also resonate with those who reject electoral politics as the pathway to the deep, sustained changes that are needed to make our society more evolved, based on human needs and values, not violence and consumerism. We can’t vote these in right now, because the system is so corrupt. However, binaries of radical change vs. electoral change are false.

Here’s what I think: the difference between Democrats and Republicans is not that Democrats will make the changes in the society that are needed. The difference is that Democrats will stay out of the way of the people as we organize to make those changes. Whereas Republicans will do all they can to use the power of the state to crush our movements, particularly movements of black people and other people of color. That alone is an important enough distinction to mobilize me to engage in electoral politics: they clear a path for the people’s movements.

That said, I hope you’ll join me on Thursday, if you’re in the Bay Area. Or buy the book wherever you are.

Democrats and progressives are going to lose if they don’t turn out people of color in 2016. That’s the urgent message of the new book, Brown is the New White: How the Demographic Revolution Has Created a New American Majority.

Brown is the New White is slated to be one of the most important books of the year. To help make the New American Majority a priority this election year, we’re hoping to sell thousands of copies in the first few days of its release (between February 2nd and February 6th), which could help it land on the bestseller list — increasing exposure of the New American Majority and creating a platform for Steve and others to speak about prioritizing voters of color in American politics and policy.

This entry was posted on February 1, 2016 by Aya de Leon in Uncategorized.