Twilight Genderflip: But How Will the Girl Vampire Have Access To Birth Control? 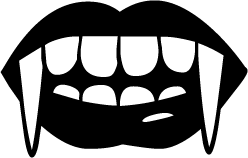 Today in wow, I did not see that coming, author Stephanie Meyer released a new version of Twilight, with the genders flipped. That’s right. This time the girl is going to be the vampire. Edward and Bella become Edythe and Beau.

On the one hand, I’ll give props to Meyer for doing the unexpected. However, she claims this is in order to prove that her wimpy heroine of the original Twilight series, Bella, isn’t a “damsel in distress,” but a “human in distress.”

But the power of Twilight wasn’t the writing, but rather how the story used powerful tropes in a new way, tropes of women’s helplessness and sacrifice, tropes of male sexuality as dangerous and violent, and–as we saw in the massive success of EL James’ fan fiction–tropes of domination and submission. I suspect that there are many equally misogynist tropes that are ready to be activated by a genderflip, such as the monstrosity of women’s bodies, women’s sexuality, and women’s reproduction. At the very moment when the House of Representatives voted to cut all federal Planned Parenthood funding, we are living in a time when women’s sexuality is already considered to be monstrous.

If you don't think this new Twilight book isn't a masterful and deliberate call-out of E.L. James, then you haven't been paying attention.

I am also curious if this is a one-off book, sort of I’ll show everyone who criticized the gender dynamics in my series! Or is Meyer committed to playing it out. Okay, we’re talking blood here. Will the girl vampire have a period? Will she get pregnant? Will she have a baby? Will her health insurance cover vampire birth control? Will she then have to deal with the challenges of being a vampire mom? Sure when it was Edward, he could go out vampiring while she stayed home with the baby, but what about when the genders are flipped?

And about that baby. What if, before they figure things out in their relationship, they get pregnant by mistake? Maybe I’ll write some fan fiction with vampire Edythe at the Planned Parenthood. And let some people scream in her face that she’s killing her baby. I’d love the scene where she goes all vampire on their asses. (Wow, I might really write that story.)

But if Meyer stops at one book, it will show that she’s not completely committed to the challenge of writing a love story where the female is the alpha. Because the greater challenges to greater equality or non-traditional roles in such a union show up over time. As a couple enters into marriage and parenthood institutions which are organized around male domination and women’s exploited labor, the forces of sexism intensify.

I’m also interested to see if the masses of Twilight readers will find it just as romantic that the male character must risk his very life to be with his love. Will there be a werewolf girl that Edythe has to battle for her man? Will that devolve into typical catfight dynamics? It’ll also be interesting to see if the fans respond to the dynamic of domination/submission in the book or if they are truly wedded to the idea of the woman being the submissive. And of course, it’ll be interesting to see if they make a movie. If they do, I wonder if they’ll use race in some shady way in the casting. It could either use white privilege to reinforce the female vampire’s power or have a vampire of color to feed into white fears of POC monstrosity. That would be truly unfortunate.

So Meyer says some things from Twilight have changed with a genderflip. I’ll be curious to see what changes. That is to say, I will be interested to hear the analysis of others who read the series. I didn’t read the original, and I won’t be reading this one. As I have said before: I’m a working mom who’s got a debut novel coming out next year, is on deadline for the second in the two-book deal, and is working on a collection of essays. Genderflip or no, ain’t nobody got time for that.

This entry was posted on October 6, 2015 by Aya de Leon in Uncategorized.