Let’s hear it for the Raiderettes: Goooooooo Women’s Labor Activism!

Earlier this month, the Raiderettes who cheer for Oakland’s football team, finally won the right to be employees of the NFL team and to get minimum wage compensation. The passing of AB 202 (“The Cheerleader Bill”) comes after last year’s $1.25 million dollar suit that gave back pay to over 90 cheerleaders for the same team. This is a huge victory for an industry where women have been expected to cheer for anywhere from $0 to $125 per game, not to mention investing time into practice and promotional appearances with no compensation, where some cheerleaders in the league have had to buy their own uniforms. Finally, it has been typical that they endure humiliating and belittling comments and instructions both verbally and in written handbooks. In a profoundly wealthy industry, the NFL is telling women they have no value or, at the very best, interchangeable.
I think these cheerleader victories are very important for all women. First of all, because it’s about seeing and valuing women’s work. But I think cheerleaders are an archetypal female role that needs more scrutiny in our society. First of all, it is the type of female labor that is made invisible as labor. As a mother, I spend a large chunk of my life as a cheerleader now. I tell my daughter, “you can do it!” about an endless number of things. I sit and watch her participate in various activities. I pay attention to what she’s doing. And then when it’s my turn (like halftime) I do my routine. “Yes! I did see you ________. It was awesome! You tried so hard. I could see how much time you put into it. I’m so proud of you. Here’s the snack I brought.” The labor of encouraging others is women’s work in this society. And it actually is labor to sit there on the sidelines and keep track of someone else’s efforts and channel your enthusiasm into someone else’s dream or success. But like so many parts of women’s work, it is assumed to be just “how we are.” If we want to encourage our children, and our children need encouragement, it is just seen as something we do. And in another culture, where everything wasn’t broken down to an hourly wage (like a tribal society or village) that would be fine. But in our society, all these activities that women do to support others are unpaid, unseen, and unvalued. In contrast to men’s traditional role in supporting families (breadwinner) which is exalted and placed above all else.
It is also a problem when women are relegated to the role of cheerleader and don’t have the option to be in the center of the action. Over the years, I have heard countless female actresses complain about roles in film/TV/theater where their lines were all a version of “you can do it, _____ [insert name of male protagonist].” They were the ingenue girlfriend, wife, lover, sidekick, friend, secretary or—less frequently—the mother. Their role in the story was to encourage the male protagonist at the point in the story arc when everything looked bleak. But they never had dreams of their own.
Finally—and this is the part that irks me the most—is the distorted way that girls have traditionally been conditioned to view and understand cheerleading in our society. I went to Berkeley High School, where the social hierarchy was diverse and decentralized. At BHS, the cheerleaders were mostly black and many were plus-sized. However, in the media, I got a clear picture of more traditional high schools where the cheerleaders were white, conventionally attractive and required to be thin. In exchange for conforming to these standards (and actually being good at cheering) these girls would be on top of the social hierarchy at school. In particular, the top of the traditional social hierarchy is the captain of the cheerleading team and captain of the football team. Extra points if they were dating. 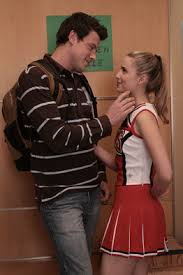 I grew up seeing these images dating back to the 50s, but recent media, like Glee and Friday Night Lights, show that these social hierarchies are still alive in many parts of the country. Which means that in 2015, girls are being conditioned as teenagers, that they should be aspiring to a position that has absolutely no career prospects. Because the real career is not being the cheerleader, it’s dating the captain of the football team. Because he is the one who has the potential for college scholarships, playing professionally, and huge wealth. Granted, only a miniscule number of high school athletes ever get to that level, but the level exists. The glass ceiling for women in cheerleading kicks in at high school graduation. Starting in college, cheerleaders do not have the same social status as football players, and we see how NFL cheerleaders are treated. By rewarding and exalting cheerleaders in high school, we are teaching women to aspire to financial dependency, and to inhabit a place that’s mostly on the sidelines. In addition, we’re also giving them a distorted sense of the importance of such a role in our society. It’s akin to what I’ve written about beauty pageants, women are encouraged to compete for access to a bridge that goes nowhere. While Title IX gives women a legal ground for equal access in the educational arena, we still have far to go in securing a place for women in the center of sports, as opposed to the sexy halftime show.

The implicit reward of cheerleading for a professional team is access to professional athletes. The women’s professional role is focused on and enthusiastic about the men’s performance. While not all cheerleaders are interested in connecting romantically with a professional player, this is a heavy part of women’s conditioning, and the male players are portrayed as incredibly attractive—physically and economically. Because NFL cheerleading economically exploits women’s desire to be connected to the team and part of the sport, it selects for women who would find the players attractive and appealing. Clearly, they’re not in it for the money. And then it targets and humiliates them for feeling those desires: according to Tim Walker at The Independent, “Some of the squads’ cheerleading handbooks provide further details of the condescension and humiliation to which the women have been subjected. A Raiderettes handbook, thought to have been updated since the lawsuit, included instructions not to dally with players or with married men in the team’s corporate office.” 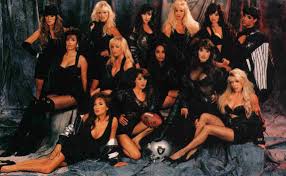 Cheerleading is not sex work. But like modeling or the entertainment industry, being sexually appealing and sexually objectified is part of the job. I write about sex work and the struggle of women doing that work to be respected and protected. Cheerleading is like sex work, in some crucial dynamics: many of the institutions of our society pressure women into these roles, and then the society simultaneously glamorizes and demeans the women. Our culture exploits women in sexualized roles and blames the women for any mistreatment they receive in those roles. I am at work on my second novel, about a group of exotic dancers who fight to unionize a chain of strip clubs in New York. Cheerleading, like sex work, like parenting, is work. We deserve livable labor conditions.
So congratulations to the Raiderettes, and all the women who have been fighting for better labor conditions in the NFL. “Go team cheerleaders–you can do it!”

One comment on “Let’s hear it for the Raiderettes: Goooooooo Women’s Labor Activism!”

This entry was posted on July 31, 2015 by Aya de Leon in Uncategorized.