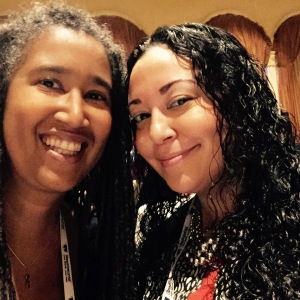 The SFWC was amazing this year for many reasons. Most of them lead back to the exciting news that I got a publishing deal earlier this month, in a two-book deal with Kensington Publishing. One aspect of the conference that felt like a miracle was that my fabulous editor who acquired the book, Mercedes Fernandez of the Dafina imprint, was there at the conference. I was able to meet her, hang out with her, and get to know her a little bit. I probably got to spend more time with her than I would have if I had visited her in the middle of her extremely busy editor’s life in New York. So it truly felt miraculous because, since becoming a mom in 2009, I have spent zero time in New York City. I haven’t even gotten a chance to meet my agent, Jenni Ferrari-Adler, who’s been representing me for a year. So, as I’m kicking off my debut novel project, and will be working so closely with Mercedes, it’s such a blessing to have gotten to connect with her in person.

The other thing that was really crucial at the conference was feeling as if I finally knew where my book would be categorized in the marketplace. Mercedes has a clear vision that this series is urban women’s fiction. So it falls into that amorphous, hard to define category of women’s fiction, but decidedly “urban” with women of color in the center. This makes sense because there are particular challenges that my protagonist faces, within a low-income community in an urban environment.  One of the things that was great at the conference was that there are so many different genres and literary subcommunities represented. And so at a panel on women’s writing, I just asked point blank about writers’ organizations for authors of women’s fiction. Romance writers have RWA, mystery writers have SinC and MWA, sci-fi/fantasy writers have a huge support infrastructure with multiple organizations and conferences. It turned out at the women writer’s panel there was a woman in the room who had started a women’s fiction organization, Women’s Fiction Writers Association. Right then and there, I could connect with her, get her card and find out about the organization. So it was great to feel that I could begin the process of networking and orienting myself based on how my book was going to be branded in the marketplace.

The final highlight of the conference was the ability to sit back and enjoy the experience more fully. The previous year’s conference was exciting, but I certainly had a significant level of anxiety. I had neither an agent nor a publishing deal, and this was the biggest annual gathering of literary professionals in the Bay Area. So I was busy preparing my pitch for agents and nervously waiting in line for my turn to meet them, and pitching them in search of a breakthrough. In other words, at last year’s conference, it was an opportunity to have contact with industry gatekeepers who had something I desperately wanted, and I was hoping someone there would see the value in my book and want to support my quest for publication. But this year, I didn’t feel as if anyone had anything I needed that wasn’t already committed to supporting me. Mercedes had already emailed saying she wanted to meet for dinner. So that was a done deal. Of course, there are still a million things that I need, and it’s not as if they’re all being dumped in my lap. But with a book deal, the conference became more of an opportunity for relaxed networking among a group of people who were more like peers. As opposed to the past where I was trying to break in. So the highlights became about connections that I was building and not hoping for the one big break. And in that place of relaxation, where I wasn’t busy trying to win the favor of the agent editors hotshots at the conference, I could sit back and focus more on building with other writers. I made much stronger connections with other writers. Including making meeting a couple of black women writers and introducing the to my editor so that they could pitch her about their work. And I love that part of networking; I love connecting other women artists with gatekeepers and resources. Just this week, two different women artists have told me that I played an instrumental role for them when they were just starting out. One was a hip hop artist who said I had given her rap duo their first public performance. I had invited them to come join me during my set and rap on stage a decade ago at a hip hop festival. The other was Lisa Marie Rollins, of Women’s Magazine on KPFA, who said in a recent interview that I was crucial to helping her as an emerging theater performer. The funny part is that I don’t even remember either of those moments, but having long been the recipient of artistic generosity, it has always felt natural to me to share. So this year’s SFWC was amazing because I didn’t come to the conference with such a strong sense that there was something I needed. I came with a sense of abundance and felt like I had something to offer.

This entry was posted on February 27, 2015 by Aya de Leon in Uncategorized.