In Support of Shailja Patel: Gossip Columns, Photos, and A Thousand Spinning Words

This is day 16 of my 17 days of blogging in support of Shailja Patel, the Kenyan writer who was allegedly sexually assaulted at an international gathering of poets only 17 days after returning home to her native Kenya.

Last week, I wrote about how I expected that as I reached middle age, I wouldn’t have to worry about men trying to grab my body and assault me in the same way I did as a young woman. Part of my outrage is the breaking of my denial here. While sexual violence is more frequently targeted at younger women, sexual violence is ultimately about male domination, and all women are at risk.

Recently, an African media outlet ran what was basically a gossip column piece that criticized Patel. Along with the article, they ran several  photos of Patel. The story the photos tell is as suspect as the copy.

The headline was pasted over this very blurry photo of Patel.

The first clear photo of Patel is this one, where she has long dark hair and makeup. She is younger and more conventionally attractive. She’s also looking very culturally Indian.

Why not choose this picture, where her short, gray hair is clearly visible, where she’s engaged in her work and not even bothered with the camera. 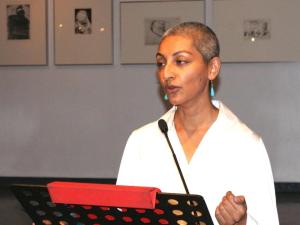 Or better yet, this photo where Patel is representing as a native Kenyan, born in Africa, reflecting her commitment to the continent and in solidarity with indigenous African people?

Many of the mainstream African media spins on this story disappoint me, right down to the photos they choose.

Join the campaign in Support of Shailja

This entry was posted on October 15, 2014 by Aya de Leon in Uncategorized.