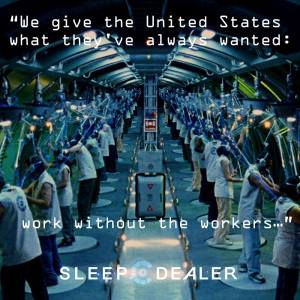 Over a decade ago, my writers group was frustrated with me. My dialogue was great and my story was interesting, but they just couldn’t see the scenes. The fiction read more like a film script because I wasn’t communicating the images in my head. “Why don’t you just write a screenplay?” one of them asked. Because films are too hard to make. I want to learn how to write a novel.

I hope that one day, my book will be made into a movie, but I’m grateful that it doesn’t need all the resources of film in order to make its way into the world.

Filmmaker Alex Rivera could have written his film Sleep Dealer as a novel. His story is certainly compelling enough. And it would have been cheaper by far. Perhaps it would have taken years for him to develop the writing skills to craft his story, but certainly not longer than the entire process of making a debut film.

But fiction wasn’t the right medium, because Rivera not only saw the images in his head, he had a clear vision to draw, storyboard and animate them. The final result is a stunning work of cinema, taking Latino science fiction to a new level. The award-winning film was originally released in 2008, but the distribution company abruptly went under, leaving the project orphaned for years. After winning back the rights to the film, Rivera and Sundance re-released it on iTunes this week.

If you’re looking for a movie this weekend, look no further than Sleep Dealer.

This entry was posted on June 20, 2014 by Aya de Leon in Uncategorized.