The Client List: Movies vs. TV & Writing About Sex Work 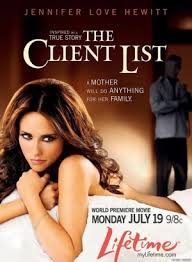 I recently responded to a call for writing about depictions of sex work for BitchFlicks.  As I said to them in my original pitch:  “While the stories are currently in novel form, they are intentionally crafted for the mainstream audience of women in the US, with strong intersectional feminist themes.  Of course, I would love to see them optioned for and created as films, but my goal is to create feminist novels that penetrate the commercial film audience.”

They encouraged me to write about a film or TV series, and reflect on my writing in the process.  I picked “The Client List,” and developed a separate piece that I sent them.  However, in the process of crafting that piece, I had some additional insights into writing that I will share here. 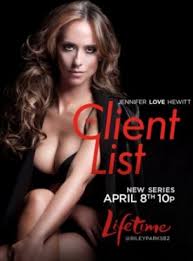 I first stumbled across the Lifetime TV series “The Client List” on hulu.  The series stars Jennifer Love Hewitt as a financially desperate massage therapist in Texas who takes a job at a health spa before she realizes that the workers also provide sexual services.  I watched a couple of episodes, and found it unrealistic.  All of the male clients were young and sexy.  Also. the implication was that the protagonist was making tons of money providing hand jobs only.  In the context of the show, she generated high loyalty from her clients by being a good listener and encouraging them to woo their wives to get more sex “at home.”

I recently viewed the original Lifetime movie version of The Client List, for the BitchFlicks piece, and found some aspects to be more realistic:  the clients were generally older and didn’t all look like male underwear models.  Also, the film implied that she was offering more sexual services, such as oral and vaginal sex.  Another key difference was that Samantha used her total recall memory to make her clients feel incredibly special.  Her ability to remember even the most minute details of their lives made them feel special and cared about..

Interestingly, however, the movie was more moralistic and judgmental toward sex work than the series.  The movie served as a cautionary tale about a fallen woman who traded too much on her looks.

The series, however, had a need to maintain ongoing tension and a more drawn out dramatic arc.  The sex work is treated more matter-of-factly.  Instead of having her lie to her husband which happens in the movie, her husband walks out on her, and his abandonment becomes one of the driving forces behind her decision to get into sex work.  She also develops an attraction to his brother, and they effectively develop the tension of a love triangle as the husband is gone, and then later, in jail.

I find it interesting that the length of the story has implications for the portrayal of sex work.  In the stand alone character arc of film, there’s an upswing and a fall.  In the ongoing series for TV, sex work has to become her ongoing job, and is treated more like work.  This, of course, is one of the major demands of sex worker advocates.  Sex work is a job, and sex workers should be treated like workers, not as criminals.

For anyone interested in pitching BitchFlicks for a piece about sex work representations, they’re due next Friday.

2 comments on “The Client List: Movies vs. TV & Writing About Sex Work”