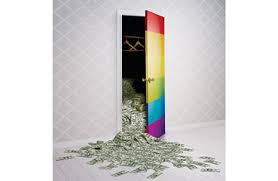 Today, the press is reporting that President Obama blogged encouraging Congress to pass ENDA, the Employment Non-Discrimination Act, which would expand protections against discrimination in the workplace based on sexual orientation and gender identity.  The Tea Party, however, is encouraging members to “Email Your Senators To Oppose ENDA.”  This is not surprising, coming from the same party that has recently been proposing legal action against homosexuality.

Former pastor and Tea Party Unity leader Rick Scarborough is suggesting that “conservative activists should take a page from campaigns against Big Tobacco and file a ‘class action lawsuit’ against homosexuality.”  This, according to People for the American Way’s Right Wing Watch.

If they move forward, Big Tobacco, like Big Agra, and Big Pharma those large corporate interests, might soon find themselves in the company of Big Homo.

The first challenges that conservative activists would face would be finding a corporate entity to sue.  Big Homo, the Gay Mafia, the Homosexual Agenda, and the Queer Menace are apparently not incorporated.  Rather, they are shadowy organizations with no boards of directors, no shareholders, and no paper trail.  It is always difficult to sue a secret conspiracy.

The second challenge would be finding an appropriate legal venue for the lawsuit.  Now that Gay Marriage has been legalized, it is inevitable that married gay people would be part of the accused, the defense team, or their roster of witnesses.  This is a significant problem because gay marriage has done exactly what Tea Party Nation’s Judson Phillips predicted last year, it has “turn[ed] marriage into a freak show involving 3 men, 5 women, 2 dogs and a Bengal tiger.”  Courtroom facilities could accommodate the men and women, and maybe even the dogs, but even the most well-equipped courtrooms are not prepared for the tiger.

Scarborough cites CDC statistics, claiming that “even the Centers for Disease Control verifies that homosexuality much more likely leads to AIDS than smoking leads to cancer.” They may also have some science problems.  In 2008, the CDC reported “more deaths are caused each year by tobacco use than by human immunodeficiency virus (HIV), illegal drug use, alcohol use, motor vehicle injuries, suicides, and murders combined.”  There may be some additional challenges to the claim that homosexuality leads to AIDS, as many of the men who have sex with men will tell you that they are not gay, and therefore unconnected to Big Homo.  Another problem is that homosexual women, who comprise at least 50% of Big Homo are at a much lower risk for AIDS then heterosexual women.  Finally, there are many complicating racial factors, such as AIDS disproportionately affecting African American men.  They will need to decide whether to name Big Negro as a co-defendant alongside Big Homo.  Finally, unprotected sex with someone who has HIV is the biggest risk factor.  If there were condoms that protected against lung cancer and people refused to use them, I’m sure Big Tobacco would have easily weasled out of that lawsuit.

In the conversation with Scarborough, Tea Party member and president of Americans for Truth Peter LaBarbera said “We always wanted to see one of the kid[s] in high school who was counseled by the official school counselor to just be gay, then he comes down with HIV. But we never really got the client for that.” Leaving aside the fact that LaBarbera just said he wanted to see a kid get HIV, perhaps they never got the client, because that’s not generally how the story goes.  In fact, some would argue that homophobia is the real culprit when it comes to gay men and HIV.  When men who have sex with men are unable to be honest with themselves about their intentions, they can’t prepare and use proper protection.  When men are pressured by bigotry into sexual situations that are anonymous and furtive, they are unable to negotiate and communicate about safety.  When men are ridiculed, targeted or threatened with violence, and socially and economically shunned or thrown out of school for being gay, they are more likely to repress their desires and act them out compulsively.  In fact, we may have a more workable class action lawsuit against Big Homophobia.  And that would have some clear and culpable defendants.

This entry was posted on November 4, 2013 by Aya de Leon in Uncategorized.