How our society is also hard on dads… 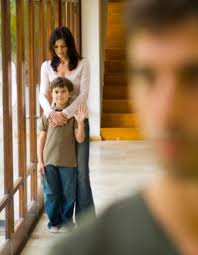 In a comment on a post a several weeks ago, I got a request to say more about how society sets men up to leave their families.

The set-up that I referred to is the fact that parenting in this society puts men under multiple levels of pressure that they have not been prepared for emotionally.  The dynamics that I’m talking about refer in particular to heterosexual couples, and  the ways males and females are conditioned in US society.

Fathers are pressured to be breadwinners in a tight economic climate.  The men of my generation were conditioned to expect to find a good job and stay in it til retirement.  The picture has changed greatly, and many men have to parent with the burden of most of the responsibility for the family’s financial future.  This can cause incredible anxiety.  While most men have had some preparation for the pressure of their work life, few have been prepared much at all for the pressure of their home life as fathers.  The domestic workload increases exponentially when couples have children, and their female partners’ capacity decreases.  In addition, their children have a desire and an expectation to have their dads’ attention and want to play.  Dads are also under pressure from their female partners to engage emotionally in ways that have often been hard for many men even before they have children. Dr. John Gottman, of the Gottman Institute which studies marriage, says that this is the first period in history where women in the US are expecting men not only to provide economically, but also to be emotional partners, and emotionally present as fathers.  “This is a new demand,” says Gottman.

Also, the logistical negotiation, decisionmaking, organization and management of co-parenting is endless, particularly if families have more than one kid.  Some families have a clear roles of who does what, but others struggle consistently to figure out the division of labor.  In the past, primary domestic and breadwinning roles were frequently divided by gender, with men primarily responsible for wage-earning and women primarily responsible for domestic work.  At least both partners had been conditioned to see that as the norm.  Nowadays, we have several layers of conditioning on top of that, many of them at odds.  Men are expected to be primary breadwinners, and women are expected to have smooth-running domestic lives while they also have fabulous careers, and everyone is supposed to spend lots of quality time with the children, and this is not really possible.  Feminists expect that their male partners are supposed to do 50% of the domestic work.  Their partners may not expect to do 50%,  or may do 20% and think it’s 50%…

Women are also challenged as moms in partnership.  There’s a tendency to see the sexism in motherhood as a personal failure of their male partner or their own inability to “get him to do more at home.”  But in reality, it’s about the society’s failure to support parents, to provide the support and economic relief—affordable daycare, parental leave, and state-funded help—that many European nations provide because they know it will benefit their citizens and society in the long run.  Our society leaves partners at each other’s throats, blaming each other for why it’s so hard, or blaming the kids for being “difficult” when, in reality, it’s a difficult situation.

What I see is dads who love their kids.  But I also see how the relationship challenges of parenting—relationships with their female partners, children, and others—and the lack of emotional support for dads creates a vacuum in which men are likely to disconnect emotionally, turn to numbing behaviors, or leave their families because they don’t have the skills or support system to manage the emotional turmoil of parenting:  seeing all your unresolved issues and imperfections rise to the surface while this wide-eyed little person is depending on you completely.

So that’s my two cents.  I wanted the dad’s perspective, so I asked Stuart McCalla, a blogger and Agile Coach who also leads men’s work to chime in.

“Dad, what are you thinking?”

My daughter asks me that all the time. I know I am doing a great job when I can appropriately tell her what’s on my mind and ask her what she’s thinking.

First want to thank my wife and partner for asking me to write what I see what faces fathers in this day and age. I think about my own father and what I remembered of him growing up, and most of it was good in my early years. He was funny, relaxed, and patient with me and my sister.

My desire to think about fathers of course came about when I became a dad. Before that, it seemed a thankless, crazy-making job. And it is.  The amazing moments are small and are hard to notice but they fill you up when you do.

Dads face a huge amount of pressure in our society, particularly as providers and partners.  The economic stress on families these days is massive, and much of it falls on dads if they are primary breadwinners.  The message is to work, work, work, and we often come home drained, without much to offer our kids in the way of emotional resources.  Most men I know who become fathers want to keep the best of their dads and go beyond what their fathers offered in order to be the best dads they can. I happen to be married to a groovy progressive feminist woman and I did not grow up with any intimate role model for how to do be male, a father, and in a relationship of negotiation and processing. So where do I go when I have struggles in my relationship?  We know that boys are not conditioned to have the same level of communication, verbal, and emotional skills as girls?  Where do we go to when we want to vent about our partners, how hard our day was, our fears for our children?  Religious and spiritual groups have answers for most of that but many of them also carry specific fear- or shame-based values or beliefs that might not help.

This is the biggest reason why dads burn out.  The isolation makes it hard for us to keep up with the emotional challenges of being a father, an earner and a partner.  We turn to various forms of disconnection and numbing out.  It is crucial that we have someone to talk to and that means that we have to be willing to talk honestly about our struggles to someone other than our partners. Most fathers who figure out how to stay with their partners and be present and connected in their kids’ lives finds a way to get some place where they can be authentic, and to have someone listen.

3 comments on “How our society is also hard on dads…”

This entry was posted on September 27, 2013 by Aya de Leon in Uncategorized.