So perhaps I spoke too soon in my previous enthusiastic post about the TV show “Devious Maids.”  It is great to see a five different Latina characters on the same TV show, but the plot and themes are quickly becoming primarily about sex, romance, and family.  In particular, the ambitious singer who began working for a Latin music superstar to advance her career, has stopped trying to push her demo album.  Instead, she’s settled in to her job as a maid, concerned mostly with romance and caretaking.

What is it that makes female ambition so easy to forget, erase, or dismiss?

This erasure of ambition brought to mind two other representations of ambitious women with unplanned pregnancies–the film “Knocked Up” and the TV show “Smash.”  Spoiler alert for both, but I hope you expected someone to get knocked up in a film of that same title.

Both storylines feature ambitious women who find themselves unexpectedly pregnant via casual sex, at the worst possible moment in their careers.  In both cases, the women choose to have the baby in a set of circumstances that seems totally unrealistic.

As an ambitious woman, a pro-choice feminist, and a mother, the romanticization of unplanned pregnancies infuriates me.  I love being a mom, but it’s incredibly hard work, and my pregnancy was enthusiastically planned with my spouse who is the love of my life.  And I still resent the implication that marriage and motherhood is necessarily the ultimate high point of my life.  I’m outraged at the fantasy that impending fatherhood will provide a quick fix for men whose lives are a mess.  In Knocked Up, the slacker one night stand pothead grows up and pulls it together to be a great partner and dad.  In Smash, the power abusing sex addict alcoholic becomes good dad material overnight.  Am I living in another world?  Day after day, I see stable married guys who really want kids blow out of marriages in the first year of parenting.  The stress is just too much for them.  I see an even lower success rate for couples who aren’t married, or in which the dads have big challenges of adult functioning.  I’m not saying men can’t or don’t rise to the occasion, many do.  But the odds are not great.  More often, I’ve seen men who really want to be reliable, connected dads, but don’t have the support, experience, or infrastructure to make that happen.  In this society, men are set up to fail at fatherhood, and then to blame themselves for it, or to blame their baby mamas or kids.

I am a huge fan of Smash, and really sorry it got cancelled.  I can only imagine what it’s like to plot a series with multiple seasons’ worth of twists and turns only to find it all has to get wrapped up quickly.  I watch TV and movies as a writer, and am always curious about how writers will handle different topics, both at a political and a craft level.  I thought the unplanned pregnancy was an interesting development for vulnerable but ambitious new Broadway star Ivy Lynn. 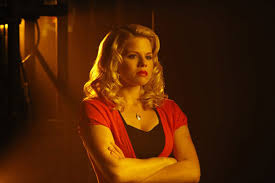 However, I was shocked that the final episode ended with her telling her on-again-off-again, sexual harassment lawsuit boyfriend that she’s pregnant, and the summary image is of them together with him holding her belly.  So I guess the point is that she finally got her mother’s love and now she can dispense with all that ambition?  I’m supposed to believe that she would give up playing Marilyn Monroe on Broadway?  This was the woman who wanted stardom so badly in the first season that she slept with the competition’s fiancee to throw her off balance.  She wanted it so badly in the second season that she stripped naked on stage.  The idea that she would keep the baby when she’s finally gotten the stardom she’s craved throughout the series is just kind of ridiculous.  When the series was cancelled, did the writers just reach into the cliche bag? 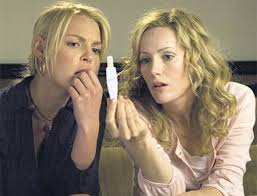 In Knocked Up, the young, ambitious media personality has just been promoted to on air, when she gets unexpectedly pregnant by a one night stand loser guy.  Although some in her life encourage her to have an abortion, she decides to keep the baby.  In both these storylines, the urge toward motherhood trumps ambition every time.  When watching knocked up, I had to imagine an earlier scene where she was Catholic and praying for a work promotion during mass.  In other words, I invented the part of the plot needed to make the premise believable.  Otherwise, I would just have been too angry that I had spent my money on the film. 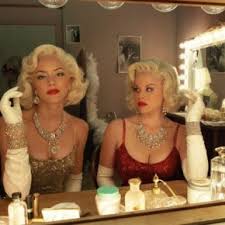 In Smash, I imagined similar scenarios that would explain Ivy’s decision.  Maybe she had been convinced that she could never ever have children.  This news was not only a shock, but would be her only chance.  Because otherwise, it makes no sense.  In what universe do ambitious, young blonde women in show business/media give up their big break to have a baby when they’re knocked up by a shady/questionable/slacker guy in a friends with benefits arrangement or a one night stand? This is a level of stealth conservatism.  Knocked Up was more garden variety sophomore men’s sexism.  Did the writers decide intentionally to create a parallel universe where abortion was not a viable option?  Did they do it to protect themselves from the potential wrath of anti-abortion conservatives?  Or did the scene that revealed the protagonist’s deep religious views end up on the cutting room floor?  In Smash, there are many openly gay male characters.  We see them kiss and understand them to have sexual relationships.  The show is clearly not appealing to the conservative Christian crowd.  But when it comes to this baby thing, they utterly undercut Ivy’s character and have her act completely out of left field.

In my observation, it has been women who are ambivalent about their careers or creative lives that have chosen to become mothers when they have unplanned pregnancies with unreliable men.  The decision to end a pregnancy is an active choice, and frequently a painful one, often fraught with guilt, shame and regret.  Many women would only be able to take that step if they are deeply driven toward something else, something incompatible with motherhood, at least at that moment.

According to the CDC, about 18% of pregnancies in the US end in abortion.  It’s hard to believe, in the real world, that these two wouldn’t be part of that percentage.

ion of these storylines is that women should go with the pregnancy and a beautiful family will result that will be worth the career sacrifice.  I live in a world where those scenarios more often lead to single motherhood and women giving up their dreams. 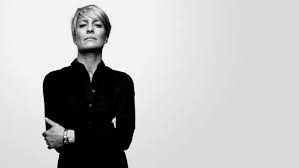 I was also surprised to see another show giving out gross misinformation about abortion effects on fertility.  “House of Cards,” a dark political drama, had a doctor telling a woman that three abortions would likely negatively impact her ability to have a child.  According to fertility expert Dr. Debbra Keegan, “Uncomplicated abortions usually pose no threat to a woman’s fertility.” Keegan explains that only “those complicated by infection or hemorrhage” can cause a problem.  On House of Cards, the female character in question is ruthlessly ambitious, and the abortions were consistent with her character.  Now that she’s in her 40s, she’s reconsidering having children. In reality, three abortions are a sign that she has a strong history of fertility.  But why does the TV show need to reinforce medical misinformation that women who have abortions will be  somehow punished?  Or are the writers also laboring under the following myth:  as a rule, women will be less able to have a child when they actually want one and are prepared to make room in their lives, as a direct consequence of an earlier abortion.  I know that women may have complicated feelings of grief or remorse after they have abortions.  They may even regret the decision, particularly if things don’t work out for them to have children later in life.  But that would translate on TV into a scene with a therapist, not a doctor giving out inaccurate information.

When it comes to punishment for family planning decisions, there has been some press lately about the consequences for women of choosing motherhood, not abortion.  A recent NY Times article discusses the high price women have paid for leaving the workplace to parent, and these are stories of privileged women in stable marriages to high earning men with planned pregnancies who have been hard hit by the career costs of motherhood, and some will never recover.

Of course, women have kids in all kinds of circumstances, and lack of resources doesn’t mean that people don’t deserve to have families.

I know many single moms who say it’s tough but worth it because they love their kids so much.  And I understand that.  The love I have for my daughter would trump just about anything.  But you can’t compare the path taken to the path not taken.  Ambitious women who have abortions often say it was worth it, particularly if they have kids later, in more stable relationships and in circumstances that only interrupt their careers instead of derailing them.

So I’m frustrated with these portrayals, because they don’t ring true to me.  Of course, I’ve written the first draft of a novel about an ambitious young woman who gets unexpectedly pregnant…It’s either novel #2 or #4 or #5 or #8 in my queue of books I’m trying to finish and publish.  Where it falls in the lineup depends on whether my current heist novel gets pitched and sold as a trilogy.  And whether I choose to self-publish my black women fighting racism in college novel as a serial.  It also depends on whether I choose to go ahead first with my YA hip hop series.  In other words, I’ve got a lot of books in my head these days.  As a mom, I’ve had to slow down on writing them, but I’m still a very ambitious woman.

4 comments on “Ambition, Ambivalence, and Abortion”

This entry was posted on August 23, 2013 by Aya de Leon in Uncategorized.