God bless Paula Deen: Bringing Racism Back to its Roots 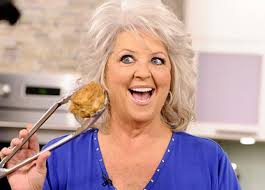 Thank you Paula Deen!  America has been waiting years for this.  A good, old fashioned racist that we can all rally around hating.  Deen is perfect.  She’s white, fat, working class, and Southern.  She freaking fries cheesecake in butter.  And she uses the N word in ways that she doesn’t even know are offensive.  She lacks the slick middle class pretense that we’re used to getting our racism all wrapped up in these days.  Yes, Paula, thank you.  We needed a break from this modern day racism.  White hipsters gentrifying the hood and bringing farmer’s markets and bike lanes.  White couples adopting brown children from Africa, Asia and Latin America.  Are these things good?  Are they bad?  Are they racist?  Should we be grateful?  Outraged?

And then there are these other white TV shows and white comedians with these jokes that seem racist, but then they make fun of how racist the jokes are.  Does that make it not racist?  Are they making fun of people of color or of themselves or of racism?  The lines are so blurry these days and everyone’s so witty and ironic.  Half the time I can’t tell if the joke teller is the white person insider who can tell that edgy joke because she/he really gets it, or if they’re the white person who tells that edgy joke trying to prove how down they are, just showing how racist they are.

And another thing.  Is it appropriation when white people build careers teaching ancient Asian arts like Yoga and Buddhist meditation?  Is it cool for white singers to cover black music and make more money than the original artist?  And in this post-integration generation, everybody grew up listening to hip hop and watching brown people on TV and has that one friend of color and all I can say is thank God for Paula Deen.  She rocks her racism old school stylee.  And so many of us, white people, people of color, are relieved to look at her and not have to wonder.  Yes, she’s racist.  Like a toned down, modern day Bull Connor with hairspray, mascara, and a bright lipstick smile.

And racism isn’t the only thing she flaunts.  She takes the foods we buy in secret and eat behind closed doors, and she cooks and eats them on national television.  She doesn’t just offer us comfort food, she offers us comfort racism. Comfort racism—where brown people can get upset without accusations that we’re overreacting.  Comfort racism—reassurances for middle class white America that they are not the monster.  Paula Deen is the white person other white people will gladly distance from. The weak member of the herd.

And we can vilify her, because she’s not signing any of our checks, and she’s so far from the urban, modern, coastal culture that produces failing school systems and deadly health disparities, and high murder rates, and these are facets of contemporary racism that we’ve learned to live with, that we’ve failed to eradicate, and that we’ve lost hope for a cure.

And when shopping for a scapegoat, why not hire a woman?  You can pay them less than men to do the same job!  And if you’re hiring a villain, then all the better.  Audiences love a good reason to hate a woman.  Cruella DeVille, the evil stepmother, Hilary Clinton.  Take Martha Stewart as an example.  She’s bounced back pretty well, but she’s the upper middle class version of Paula Deen, getting caught for an upper middle class crime.  America was glad to have her, like Deen, build an enterprise in the domestic sphere, but all that business enterprise stuff is really men’s domain anyway.  America is equally glad to see any woman’s enterprise come crashing down.

Of course, the content of what Deen is accused of is ghastly.  But it’s a level of racism and sexism that are disturbingly common.  Deen isn’t the exception, she’s only the exaggeration, so she makes a convenient target.  Paula Deen is like a trip to Jurassic Park.  She roars up like a T-Rex, a relic of old school racism, and we can all scream and point, and run back home to our safe, contemporary, urban lives, where the racism has been refined into tiny, airborne particles.  And the white meditation/yoga teacher tells us to inhale and exhale and feel the breath in our lungs…

2 comments on “God bless Paula Deen: Bringing Racism Back to its Roots”

This entry was posted on August 3, 2013 by Aya de Leon in Uncategorized.