For anyone who doesn’t know yet, the princess of England finally had her baby.  He is the great grandson of England’s Queen Elizabeth II.  The queen has reigned for over 60 years, threatening to overtake Queen Victoria’s 63 year record for one of the longest reigns in recorded history.   Meanwhile, Anglophiles all over are celebrating the birth of the royal heir, and in particular, that it’s a boy.

So I’m not an Anglophile.  Outside of the garden variety US connection to England, my most immediate relationship to the UK is that my West Indian ancestors were colonized by England.  I’m no fan of their colonial empire, their genocidal practices, or their food.  But in 2013, I was taken aback to see the gendered hysteria about the birth of a son, an heir to the throne that doesn’t actually govern the country anymore, or oversee an empire full of colonies that are mostly “independent” now. 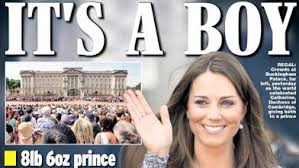 Overall, I think it’s the nostalgia for patriarchy, empire, and European hegemony that I find so disturbing.  Also, having given birth in the last five years, it’s also creepy this huge public construction of the princess as a vessel to bring forth life in general, and the royal heir in particular.  Not that I’m questioning the miracle of women bringing forth life.  That part is amazing.  I just don’t like the vessel part.  I’m not a container, or a holding tank.  Women are human beings.  We are fully human as we carry babies, and fully human (and also fully female) if we don’t.

So it’s a boy.   I wish for him what I would wish for any baby:  an uncomplicated natural birth, at least a year of breastfeeding with his mom, a very close relationship with both his parents, lots of love, permission to have a whole range of feelings, someone to listen patiently while he cries, no rush to “be a man,” and a world that will give him some room to be himself beyond the boxes of gender.  And maybe, a boy brought up under those conditions could have the empathy needed to be an ally against the history of oppression that the British crown represents to so many of us.

This entry was posted on July 26, 2013 by Aya de Leon in Uncategorized.