In the US book world there is a historical rivalry between literary and popular fiction.  Literary fiction is supposed to be intellectually superior with more depth and meaning.  Popular fiction is supposed to be more effective in connecting with readers and gains a much wider audience.  Literary fiction writers win prestigious prizes.  Popular fiction writers get fat advance checks.  In the current economy, the literary industry is often looking for books that are a little bit of both—well written, but with a premise and plot that can be commercially successful.

As an aspiring novelist, I’ve been paying attention to this rivalry for decades.  At different points in my writing life, I’ve envisioned myself on various points of the literary/commercial spectrum.  Since I went to an elite college for undergrad, I have an MFA, and I teach at UC Berkeley.  I have been groomed to write some genius work of literary fiction.  But as my aspirations go from fantasy towards reality, I don’t appear to have that book in me.  Every piece of fiction I’ve written has a murder mystery or a heist or an FBI agent protagonist, or at least is heavily plot driven.  It’s just how my mind works.  For years, I felt bad about it.  I tried to write with a more literary voice, but it mostly just sounded pretentious and confusing.  The title of this post is an homage to popular fiction writer Terry McMillan’s novel.  Although her own life has proven that finding happiness isn’t as simple as finding a sexy man in the islands who wants to marry you, she forged the road for popular fiction women writers, particularly women of color.  McMillan’s fierce, working class hustle marketing changed the literary industry.  In spite of her commercial success the 80s and 90s, I recall the snobbery which she encountered in the literary world–even within the African American community–and that has informed my own anxieties, as well.

I’ve completed several novel manuscripts that I couldn’t sell in the current literary market.  When I started to write my current book—a suspenseful heist novel about sex workers redistributing wealth to fund healthcare—I got excited.  It seemed to have two important ingredients for success:  a sexy premise that could sell, and a level of political content that would keep me interested.

But when people would ask me about my book, I was a little embarrassed.  Hooker heists?  My early dreams of winning a Pulitzer clearly needed revision.  Maybe I had taken on some of the stigma that’s projected onto sex workers, or maybe I just felt like I had failed to live up to my highbrow literary potential.  But then the book Fifty Shades of Grey came out, a commercial novel about a relationship where a naive young woman becomes sexually submissive to a billionaire.  I wasn’t so much outraged by Fifty Shades… as I was by the Newsweek article that covered it.  With a blindfolded model on the cover, the subtitle ran:  “Why Submission is a Feminist Dream.”  The article about Fifty Shades, written by a woman, asserted that the commercial success of the book clearly means that women wanted to be sexually dominated by men.  The author reasoned that now women are so totally empowered (she cited the fact that many married women make more money than their spouses), we feel ambivalent about that power.  So we want to be spanked.  Apparently all of us, especially the feminists. 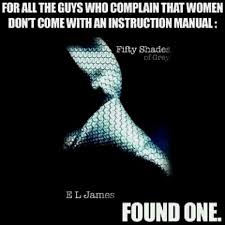 This is like asserting that people’s widespread interest in Silence of the Lambs means, hey, at the end of the day, everybody just wants to eat each other for dinner, right?  Can’t we just admit it?  Of course, that’s preposterous.  People are attracted to books that are shocking or kinky for all sorts of reasons.  And this is in no way to equate BDSM with cannibalism.  Particularly since cannibalism is rarely consensual.  It’s just that when it comes to women consenting to being sexually dominated by men, interest in one book gets used as evidence that all women secretly desire this.  Men who want to sexually dominate women use this as justification.  Check out this creepy meme from the Internet.

I find this outrageous, in a world where sexual violence against women is real, and often justified (at least in the minds of the violent) that women want and/or deserve it.  Of course, the article never mentioned violence against women, or abuse of power of any form.  And I got mad.  And I started thinking about my own book, which centers on a diverse group of women working to save a clinic that protects a community of sex workers from violence and exploitation, to maintain their health and keep their options open.  Suddenly, I didn’t feel so bad about my book.  In fact, I wanted my book to sell a billion copies.  In particular, I wanted the young women who had read Fifty Shades to also read my book.  If  Fifty Shades says that young women are intrigued by BDSM themes, this is what my book will say about them:  the society values you for appearance, and sometimes you work that angle, but you don’t let it define you.  You look around at the world and want to change things.  You team up with other women to make it happen.  When things get tough, you become bolder, more resourceful.  You are flawed but still fabulous.  If a billionaire comes along, you are anything but naive.  You take on big challenges with high stakes, you put everything on the line for your beliefs, even where the outcome is in no way assured…

I still feel occasionally shy about my book, but I am fully committed to seeing it gain as broad an audience as possible.  However, if there’s widespread interest in my book, you certainly won’t find Newsweek running an article about how all billionaires secretly desire to be robbed by former sex workers running health clinics.  But if it turns out that they do, I would like all ready-to-be-robbed billionaires to know that I am available to dress up in health clinic director fetish gear and rob them, as long as they let me keep the money.

This entry was posted on April 26, 2013 by Aya de Leon in Uncategorized.